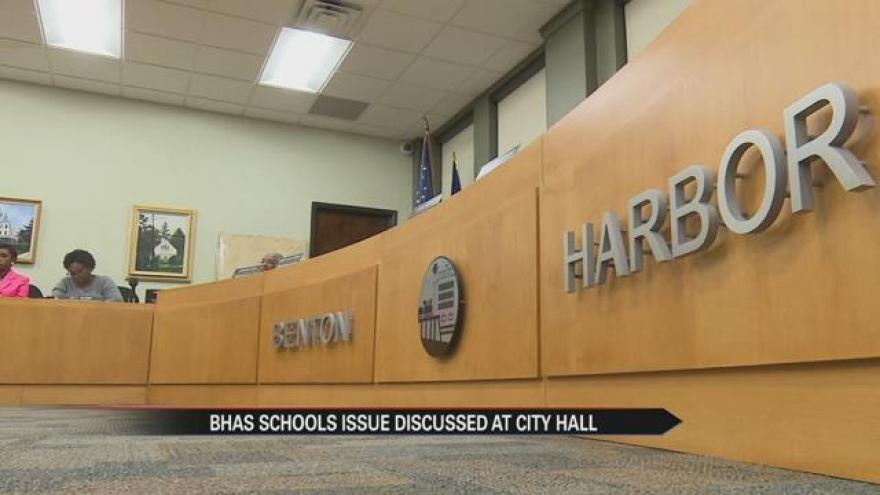 “We are here to really hear from you because the most important stakeholder in this whole equation is you,” Benton Harbor Mayor Marcus Muhammad, who organized the town hall, said at the start.

Over the next two hours, nearly 20 concerned parents and residents went up to the microphone and explained why they felt closing three of the district’s six schools would be detrimental.

“The point where we are now is not acceptable to me,” one voice said.

“I took my child out of this district three years ago because I saw the ship sinking,” a mother said.

“Closing our schools is really not an option,” one man said. “And if they do that, they’re gonna create more problems.”

“I am totally against – against – our school district closing,” one woman said. “And everybody should be.”

“I love my kids’ school,” another mother said. “I love the grades that they’re getting – the success that it’s bringing.”

“Do we really know who’s in control?” another asked.

“Our kids are being cheated and robbed,” another said.

“I live in Grand Rapids now, but I’m here tonight,” one man explained.

“I don’t have any children of my own, but we all have to understand because you’re a resident, every child that you see getting on the bus, in the store, that’s your child,” another man said.

“They have been waiting for us to stand for them,” another voice said.

“When we start to unify, you all, that’s when things will start to happen,” one woman said.

“I’m willing to walk with those who are serious about this to get the job done,” one mother said.

“Let’s get it together!” one man said. “Whatever we gotta do.”

“Do we have problems?” one school board member asked. “Absolutely…but can they be fixed? Absolutely.”

“We need to hear from you,” another school board member said to the crowd. “And please trust us.”

“Our students, our kids, deserve the best,” Benton Harbor Area Schools’ assistant superintendent of curriculum said. “And we will make sure, no matter how long it takes, that they get the best.”

Not one person in the meeting said they felt closing the three schools would be a good idea.

Though local political, religious and school leaders were present at the meeting, superintendent Dr. Shelly Walker was not.

Mayor Muhammad said she was invited, but was away at a conference. She sent representatives in her place.

There will be one more town hall at the MLK S.T.E.A.M. school on Wednesday, February 1, at 7 p.m. to discuss the possible closings.

In the meantime, attendees were discussing the possibility of traveling to Lansing to protest to keep the schools open.

A tentative date of February 24 has been set for that.