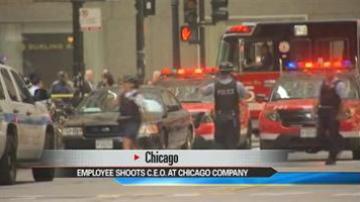 Police say a man who was just demoted at work shot the Chicago company's C.E.O. before turning the gun on himself Thursday morning.

Police say the 59-year-old employee died at the scene.

The 54-year-old C.E.O. is in the hospital in critical condition.

"They've been downsizing. They've demoted a number of people. An employee came in, I believe he was demoted Friday on what we know so far, for a 1 on 1 with the C.E.O. During that 1 on 1 he produced a firearm," said Chicago Police Superintendent Garry McCarthy.

The man who killed himself was the company's former chief technology officer before that demotion.
Share this article: