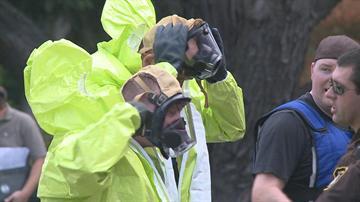 The leak was reported at Advance Product on M-63 in Hagar Township around 1:30 p.m. by employees.

According to the North Berrien Fire Department, several workers reported a burning sensation in their eyes, nausea and smelling a pungent odor.

The Berrien County Sheriff’s Department Hazardous Materials Team took measurements of the air quality inside the building before employees were allowed to enter.

Responding fire fighters took initial measurements of carbon monoxide near the leak. “We were way over the safe level as far as the CO goes,” said Chief Dave Woodward with the North Berrien Fire Department.

Woodward said the leak was caused by a faulty valve on an ammonia tank. Within ten feet of the tank, CO levels were reading hundreds of times higher than levels considered safe. “It’s very dangerous,” he said. “At cloud level it could kill you.”

Employees were not seriously injured and all of them refused medical treatment.