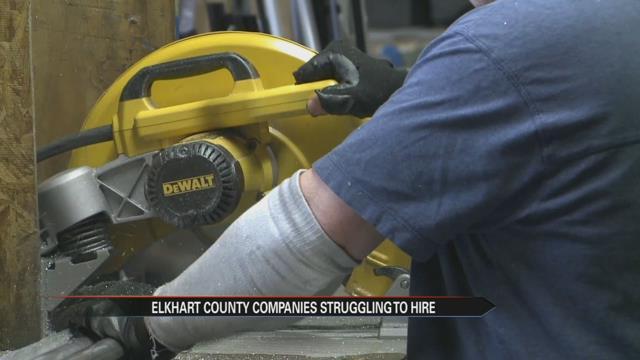 Several employers in Elkhart County say they are in need of qualified workers, but say finding an applicant who can do the job is easier said than done.

“That’s the big challenge among all the employers out in Elkhart County right now is where do you find the workers, can you get the workers you need,” says Kyle Hannon, President, The Greater Elkhart Chamber of Commerce

Hannon says at least once a week employers from a wide variety of industries in Elkhart County tell him they are trying to expand or fill demand but need more workers to do so.

Gregg fore, the president of dicor, says with the unemployment rate at about 4% in Elkhart County the job pool is now full of slim pickings.

“We expect you to be there every day regardless of whether it’s Friday or Monday,” says Fore.

Fore says many new hires are missing skills like punctuality, and also says every day Dicor gets an applicant who cannot pass its drug test.

“When you get down as low as we are in the labor pool we find people with bad habits and we find a higher percentage of them with bad habits,” says Fore.

“We can’t tell how effective it’s being at this point but we are seeing quiet a bit of traffic that we can tell people are looking at it,” says Dobson.

Data is used to display the job ads to individuals who live in areas with high unemployment and a large number of skilled manufacturing workers.

Although metrics cannot filter through the quality of worker seeing the job ads, Dobson remains optimistic.

“Anybody willing to invest in a move is probably somebody thinking I want to make this long term and so it will be a pretty high quality individual,” says Dobson.

Dobson says the EDC will reevaluate to see if the campaign is bringing more skilled workers to Elkhart County.