Endeavor inches ever so slowly toward its new home 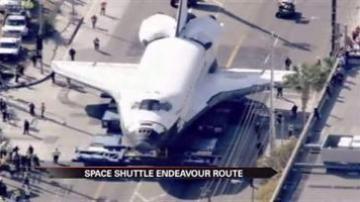 LOS ANGELES -- In a city that it is known for fast cars and high speed chases, it was a slow speed that had thousands of onlookers.

The Space Shuttle Endeavor traveled more than 123 million mores and at speeds of more than 17,000 miles an hour during its service with NASA.

But now it is cruising at a snail's pace of just two miles per hour as it makes it way towards its final destination at a museum.

And the move has not been easy.

The 78-foot wing span forced hundreds of trees to be cut down and power lines were even raised to make room for the tail.

The shuttle was put on dolly's and was pulled by a pick-up truck Saturday morning.

And the move comes at a hefty price tag, an estimated $10 million.