Endurance athlete sweating for a cause 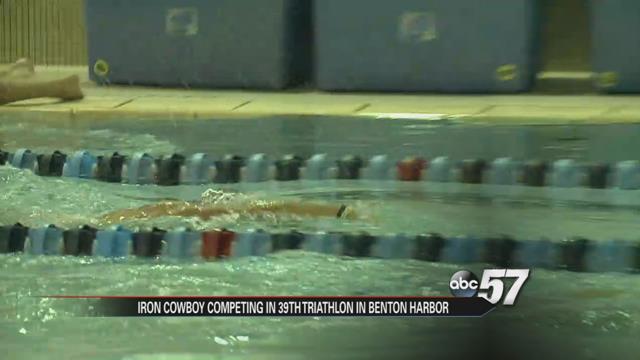 James Lawrence is an endurance athlete and he made his way into Michiana on Tuesday morning.

He is on a mission, a mission that is 50 days long.

It started on June 6th in Hawaii. Everyday since then he has done the equivalent of an Ironman distance triathlon. What that really means is a 2.4 mile swim, 112 mile bike ride, and a 26.2 mile run everyday. His goal is to do a triathlon a day for 50 days, in 50 states. It is called the 50-50-50 challenge.

Lawrence already holds the record for the most Ironmans completed in a year and now he wants to beat that record.

He is a husband and father of five children. He said he has seen how bad childhood obesity is so he wanted to do something extreme to get people's attention.

The goal is to get the public involved too as a way to raise awareness and money for the cause.

So far he has raised about $50,000 from the 50-50-50 challenge to fight this epidemic. He is partnered with The Jamie Oliver Food Foundation.

The swim portion of the triathlon began at 7 a.m. at the YMCA in St. Joseph. The bike ride began shortly after at Jean Klock Park in Benton Harbor. At 7 p.m. the public is welcome to run with the Iron Cowboy in a 5K as he runs to complete the marathon portion.

It is free to participate; however, donations are accepted because that is how he raises money for his campaign.

5K participants will check in at the Whirlpool complex in Benton Harbor.