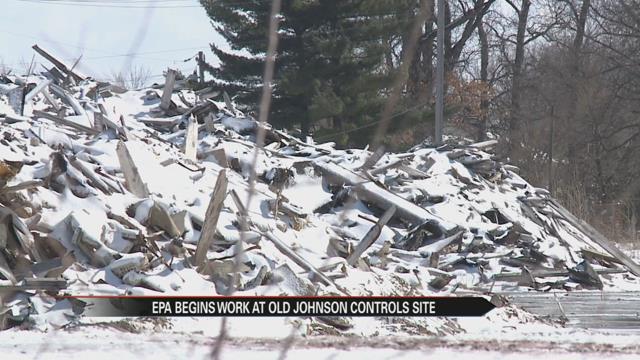 A federal agency is intervening at a Brownfield in Goshen. On Wednesday the Environmental Protection Agency began clean up at the old Johnson Controls site.

Two weeks ago an attorneys representing a group who live near the site revealed the debris at 1302 East Monroe Street tested positive for asbestos.

The EPA’s crew of five was fencing the area and will start covering the piles of debris with tarps.

"We are limiting access and limiting migration of the material off site due to wind," says Andrew Maguire, an On-Scene Coordinator with the EPA.

A neighbor says this reaction is long over due.

“They aren’t doing anything to it they aren’t cleaning the mess up,” says Gene Catron a Goshen Resident.

Catron explains what he has seen living in this neighborhood for the past two years.

He is not part of the group of neighbors who have filed lawsuits against Johnson Controls and the company Tocon. Those neighbors denied a comment.

Regardless, Catron’s opinion of the site is strong.

“They have been asking for that for a while and so I am happy we are able to do it,” says Maguire.

Maguire says attorney John Ulmer contacted him with news of this debris testing positive for asbestos.

Maguire made his first visit two weeks ago with his own contractor to test the debris.

“He was able to pinpoint visually which is asbestos so this should solidify but we don’t know yet,” says Maguire.

Around 5 p.m. Wednesday test results came in. Maguire says his test of the debris were positive for asbestos.

The stabilization of the site will eliminate potential exposure for those who live nearby.

“There are some pieces that are moving from the pile towards the perimeter of the site and so that's why we are going to do a tarp,” says Maguire.

The EPA also wants to protect those who are just passing by.

“That’s the shocking part is that it is so wide open and that just anybody could just people drive straight through,” says Maguire.

Maguire says complete clean up should take a couple of months.

For those who can see the site from their windows even the slightest progress means something.

“It makes me feel a lot better,” says Cantro.

Maguire says the fencing and laying out tarps should be done by Friday.

He adds actual clean up will take a couple months.