Escaped prisoner back in custody in Virginia 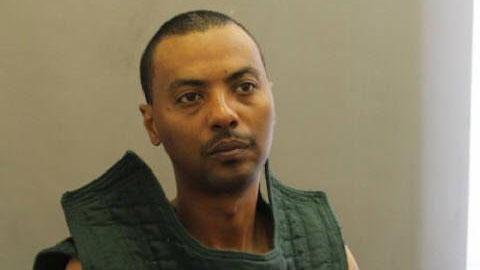 (CNN) -- An alleged bank robber who overpowered a guard and escaped a Virginia hospital is now back in custody, police said Tuesday.

Wossen Assaye was being watched by two private security guards at Inova Fairfax Hospital in Falls Church, Virginia, when he managed to grab the gun of one of the guards. A shot went off in the struggle, and Assaye escaped in a hospital gown, Fairfax County police said.

He was seen chasing people in the hospital, according to a law enforcement official.

After the hospital went on lockdown, police announced that Assaye stole a vehicle, abandoned it as authorities searched for it, and then stole another.

At some point, he apparently managed to get some clothes. Police said he may have been wearing a dark colored jacket and blue jeans.

Assaye has a girlfriend and family in the area. While the search was on, authorities said they were looking into whether he was with them.

It was not immediately clear why Assaye was being watched by private guards at the hospital, rather than by police.

"This will be looked into," Fairfax County police tweeted.

Assaye was being held on federal charges of armed bank robbery. He was taken to the hospital for treatment after attempting to harm himself, police said. A private security company was hired to guard him.

He was arrested last week and charged with multiple robberies in the Northern Virginia area.

He'd been called the "bicycle bandit" for the manner in which he allegedly made his escape after robberies.

CNN's Athena Jones and Evan Perez contributed to this report.