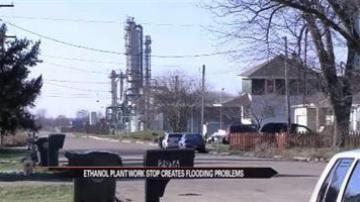 SOUTH BEND, Ind. -- Losing the ethanol plant to bankruptcy was a blow to South Bend's economy, but stopping work at the plant is causing problems for nearby residents.

"My biggest concern is once all the snow comes in here or we have a big rain season, what's going to happen if there's not a company that's moved in?” said Davis.

It's been just a few weeks since production stopped at the ethanol plant at the end of Calvert Street.

Issues are already starting to pop up.

"Every time I look out the kitchen window, water is pouring out,” said resident Karen Rader.

It's a problem Rader expected.

"I told him, if you think you've got water now, wait until next spring. They're probably going to need a boat,” said Rader.

While it was operating, the plant pumped around 2 million gallons of water out of the ground per day. All of that stopped when the plant shut down.

"The water table is at where it was when we moved in,” said Rader.

Rader moved into her house in 1974. None of the other houses were around then.

"Our basement flooded, the year after the blizzard. It was over the top of the washer and dryer,” said Rader. “That was before they built the ethanol plant."

Since then new homes have been built with basements deeper than Rader's. The owners of those homes have pumps that are going constantly.

It’s something Councilman Davis wants to see addressed as soon as possible.

"Let's deal with it right now, while we are just having this initial issue and then that way we can help solve the situation much better,” said Davis.

The city has sent out more than 200 letters to area residents telling them about a public meeting next Tuesday at the Rum Village Nature Center at 6 p.m.

City engineers are supposed to be on hand to talk about what people can expect and what they can do.