Ever Given ship freed in the Suez Canal, authority confirms 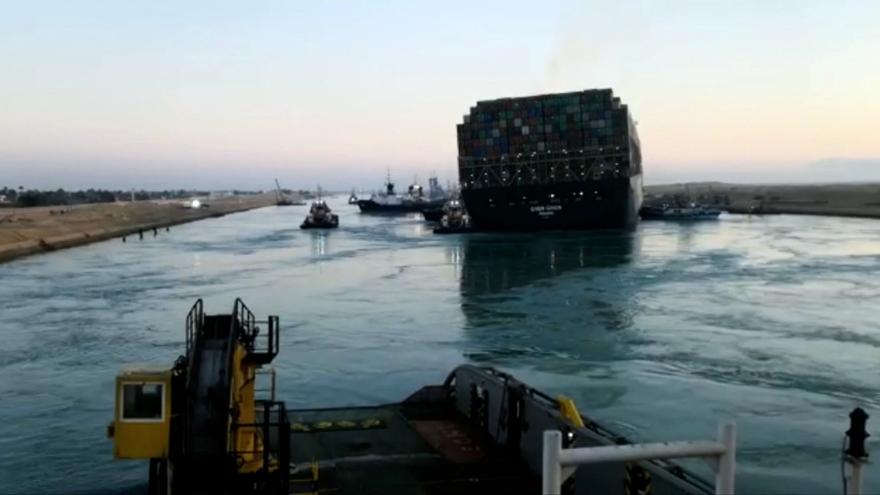 (CNN) -- The Ever Given container ship has been dislodged and is now floating, after blocking the Suez Canal for almost a week, authorities said Monday.

Tug boats had spent several hours on Monday working to free the bow of the massive vessel after dislodging the stern earlier in the day.

Marine traffic websites showed images of the ship away from the banks of the Suez Canal for the first time in seven days following an around-the-clock international effort to reopen the global shipping lane.

The successful refloating was met with triumph and relief.

"We pulled it off!" Boskalis, a salvage company which helped with the operation, said in a statement Monday.

"Boskalis announces the successful salvage operation of the grounded 20,000 TEU container vessel Ever Given in the Suez Canal," the firm said, adding: "With a length of 400 meters and a width of nearly 60 meters, this giant ship had been wedged in this vital shipping route since 23 March 2021 blocking all shipping traffic."

The ship is now being towed towards Egypt's Great Bitter Lake, where it will undergo an inspection, the head of the Suez Canal Authority (SCA) Osama Rabie said, according to state-run Al Ahram newspaper. The vessel's charter company will decide on the next steps once that has been carried out.

"The outcome of that inspection will determine whether the ship can resume its scheduled service. Once the inspection is finalized, decisions will be made regarding arrangements for cargo currently on board," charter company Evergreen said.

The ship was refloated at 3pm Egypt Standard Time on Monday (9a ET), according to Evergreen.

Marine traffic websites show the ship moving at a speed of 1.5 knots towards the lake.

The rescue operation had intensified in both urgency and global attention with each day that passed, as ships from around the world, carrying vital fuel and cargo, were blocked from entering the canal during the crisis, raising alarm over the impact on global supply chains.

Promising signs first emerged earlier on Monday when the rear of the vessel was freed from one of the canal's banks.

"The container ship began to float successfully after responding to the pulling maneuvers," said Osama Rabie, head of the Suez Canal Authority (SCA), in a phone interview with state TV. "Once the ship is withdrawn, we will resume navigation directly, and we will take it to the Bitter Lakes."

People at the canal cheered as news of Monday's progress came in.