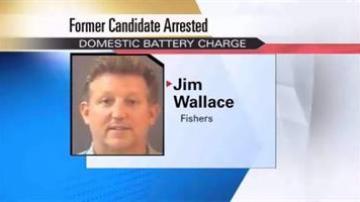 INDIANA -- A candidate that toyed with a run for Indiana Governor now faces a domestic battery charge.

Jim Wallace was arrested after he confronted his wife on Sunday.

The wife told police that Wallace grabbed her throat and pushed her against a wall.

Wallace was arrested on a charge of domestic battery, which is a felony.

He tried to run against Mike Pence but did not appear on the primary ticket because he failed to collect enough signatures to make the ballot.