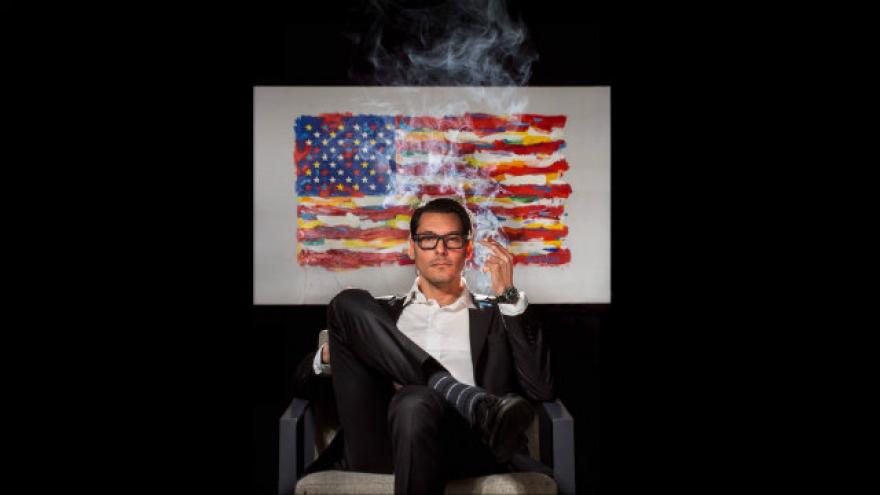 A former FBI employee is running for Congress as the \"Cannabis Candidate,\" with a campaign ad featuring him smoking marijuana in front of an image of the American flag. Photo courtesy Benjamin Thomas Wolf

(CNN) -- A former FBI employee is running for Congress as the "Cannabis Candidate," with a campaign ad featuring him smoking marijuana in front of an image of the American flag.

Benjamin Thomas Wolf is one of three challengers to incumbent Rep. Mike Quigley in the Democratic primary for Illinois' 5th Congressional District, which includes parts of Chicago.

The campaign ad, shot in Wolf's apartment, was a way to let voters who are in favor of marijuana legalization know that "there are people that hear them and agree with them and will stand up for what they think is important," Wolf said.

"It was my idea. I knew that we needed to do something with cannabis -- to take a little bit of a risk, but at the same time connect with the voters," he told CNN in a phone interview Wednesday.

Wolf said he believes that legalizing marijuana in Illinois would reform the criminal justice system and bring in billions in tax revenue.

Cannabis is not something Wolf uses every day, he said -- just a few times a week in the evenings to unwind and sometimes to tap into creativity when he's working on his campaign.

Long before trying cannabis for the first time (accidentally eating pot brownies that were included in a care package sent to him from a friend in California), Wolf worked as a national security investigator with the FBI, including following the September 11, 2001, terrorist attacks.

"The government trained me to be strong, and suspicious, and just stern. ... I'm thankful I have cannabis in my life. I think it has allowed me to be a gentler person, maybe a better father, a better partner," said Wolf, who is dad to twin boys and a newborn son. "I'm much more empathic. ... I'm an evolved person because of it."

He worked under Robert Mueller, who was FBI director during 9/11, and said Wednesday that Mueller was the "perfect man" for the job of special counsel to investigate Russian interference in the 2016 election.

Wolf spent about five years with the FBI before transferring to the State Department in 2003 and working as a US diplomat and special agent overseas in Iraq and Africa, according to a bio on his campaign site.

Trained to use an AR-15 and carry the weapon in conflict zones, Wolf also weighed in on the debate over whether they should be banned: "These are true instruments of death. And I think that there's no place for them in modern American society," he said.

While his campaign website states that the Second Amendment must be respected, Wolf holds an AR-15 in one of his campaign ads, explaining the weapon's functions and why he thinks it should be banned "immediately."

As a former FBI employee, Wolf called the bureau's admitted failure to follow up on a tip about the confessed shooter in the Parkland, Florida, school massacre "tragic."

"The people (at the FBI) are just such professionals and so thorough in their investigations, but you simply can't stop every threat and every attack. I think it's really unfortunate," Wolf said.

Wolf left the State Department about five years ago and transplanted to Chicago to finish his doctorate in psychology. Since then, he's become a professor, opened a restaurant and started a housing nonprofit. He decided to run for Congress after being "constantly disappointed" with Illinois' elected officials and hoping this election brings a "next generation of Democratic leadership" in Washington.

"Folks like Nancy Pelosi are the age of my grandmother. ... I would not want my grandmother or my grandfather speaking for everyone at this point and leading the country. It's their time to retire and go spend time with their grandchildren," said Wolf, who's 42.

Wolf faces off against Quigley, who won re-election in 2016 with over 67% of the vote, former Yale undergraduate director Steve Schwartzberg and Sameena Mustafa.