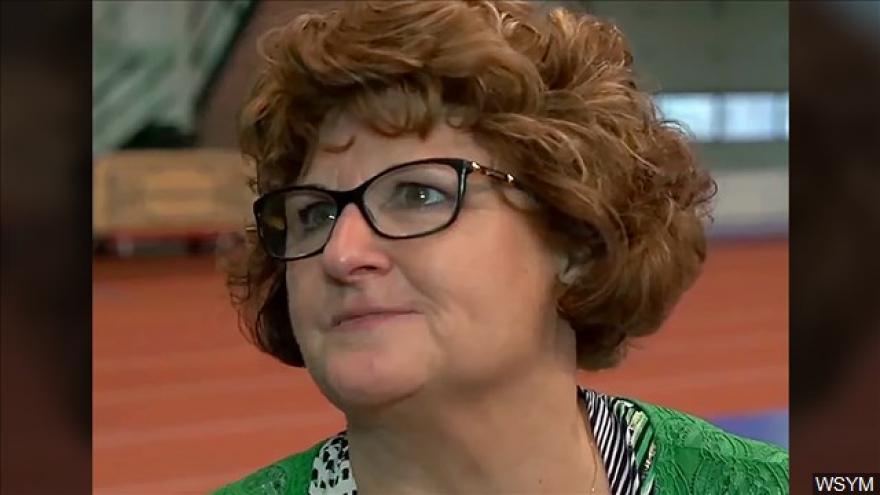 Kathie Klages is accused of lying to an investigator in June, when she denied that witnesses told her years ago about being sexually assaulted by Nassar. She was charged Thursday.

Numerous other people have been criminally charged, fired or forced out of their jobs amid the investigations into the once-renowned gymnastics doctor. He was sentenced to decades in prison after hundreds of girls and women said he sexually abused them under the guise of medical treatment, including while he worked for Michigan State and USA Gymnastics, which trains Olympians.

Here's a look at some of the individuals or organizations that have been charged, ousted, opted to quit, taken leaves or had ties cut:

— Lou Anna Simon: The university president and school alumna resigned in January amid growing pressure from students, lawmakers and some members of the school's governing board. She acknowledged being "the focus of this anger" but has denied any cover-up by the university. The governing board later hired former Michigan Gov. John Engler as its interim president . The school has already settled lawsuits totaling $500 million.

— Mark Hollis: The athletic director and a Michigan State alumnus called his January departure a retirement, but he, too, had faced pressure to leave. Hollis had been on the job for 10 years. He said he made the choice because of "the scope of everything," adding that he hoped his departure would help the "healing process."

— Kathie Klages: The former head gymnastics coach resigned last year after she was suspended for defending Nassar over the years. Klages was charged with lying to police amid the investigation. If convicted, she could face up to four years in prison. She has denied allegations that former gymnast Larissa Boyce told her that Nassar had abused her in 1997, when Boyce was 16. Boyce has said Klages dissuaded her from taking the issue further, even after another young gymnast relayed similar allegations.

— Brooke Lemmen: The former school doctor resigned last year after learning the university was considering firing her because she didn't disclose that USA Gymnastics, which trains Olympians, was investigating Nassar.

— William Strampel: The former dean of the university's College of Osteopathic Medicine was charged in March amid allegations that he failed to keep Nassar in line, groped female students and stored nude student selfies on his campus computer. Strampel, who has also been named in lawsuits, announced in December that he was taking a leave of absence for medical reasons. The school announced that month it planned to fire Strampel. He ended up retiring June 30. He receives basic retiree health care coverage and got $175,000 — less money than he would have — while forfeiting emeritus status and other benefits typically accorded to retired executives. He is awaiting trial on the criminal charges.

— Bob Noto: The university announced in February the departure of its longtime vice president for legal affairs. The school called it a retirement. Noto had been Michigan State's general counsel since 1995. Trustee Brian Mosallam had sought Noto's resignation.

— Valeri Liukin: The coordinator of the women's national team for USA Gymnastics announced in early February that he was stepping down, less than 18 months after taking over for Martha Karolyi. Liukin said that while he wanted to help turn the program around, "the present climate causes me, and more importantly my family, far too much stress, difficulty and uncertainty."

— USA Gymnastics said in January that its entire board of directors would resign as requested by the U.S. Olympic Committee. The USOC had threatened to decertify the gymnastics organization that picks U.S. national teams and is the umbrella organization for hundreds of clubs across the country.

— Steve Penny: The former president and CEO of the organization resigned under pressure in March 2017. He was replaced by Kerry Perry, who took over in December.

— John Geddert: The owner of the Michigan club was suspended in January by USA Gymnastics and announced his retirement. He was the U.S. women's coach at the 2012 Olympics. Geddert has said he had "zero knowledge" of Nassar's crimes.

— USA Gymnastics said in January that the ranch outside Huntsville , Texas, would no longer serve as the national training center where a number of gymnasts said Nassar abused them. Owners Martha and Bela Karolyi have since sued the U.S. Olympic Committee and USA Gymnastics, seeking damages for a canceled sale of the property. They also have been named in lawsuits .

— Debra Van Horn: Texas prosecutors in June filed sexual assault charges against Nassar and Van Horn, a trainer who worked at his side at the Karolyi ranch. She had also worked at Indianapolis-based USA Gymnastics for 30 years. She was charged with second-degree sexual assault of a child. The local prosecutor said Van Horn was charged as "acting as a party" with Nassar, but didn't elaborate.

— Scott Blackmun: The CEO resigned in February, citing difficulties with prostate cancer and the federation's need to urgently move forward to deal with the sex abuse scandal. He was diagnosed with cancer earlier that winter. Blackmun left amid calls for his departure, including from two U.S. senators who said neither he nor the USOC at large properly reacted to sex abuse cases involving Nassar. The USOC is conducting an independent review of when Blackmun and others learned the details about abuse cases at USA Gymnastics and whether they responded appropriately.