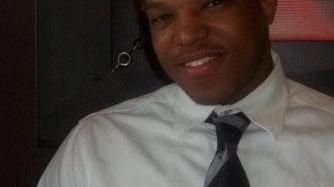 Renee Johnson said that she is devastated and not sure what she is going to do.

The shooting happened around 6:30 p.m.

According to Metro Homicide, Simril was shot multiple times. He was rushed to Memorial Hospital where he died.

Johnson said she tried to call her son several times but those calls all went to voice mail.

At 8 p.m. she told us that detectives showed up at her front door to tell her about her son. She went to the hospital to confirm his identity.

Simril has a younger sister that is 11-years-old.

The family is originally from St. Louis, Johnson said that his funeral will be held there so that all of their family can attend. She said she would like to have a local memorial for students to attend.

Simril was a senior at Washington High School. Friends said he wanted to go to Purdue in the fall and study pharmacy.

No suspects have been identified in connection to the deadly shooting, no arrests have been made.

Friends told us they can't imagine why anyone would do this to Chris. They describe him as the poster-child student, outgoing, and fun to be around. They think that he was just at the wrong place at the wrong time.

Simril's Facebook page lit up over night with comments from friends, many of them classmates.

About 30 students came and went Monday morning from New Generations Ministries off of Western Avenue on the city's west side. Students from Washington High meet there each Monday at 6 a.m. to pray. Monday morning it was very somber as students hugged in the parking lot and prayed.

Chris' mom stayed for about 15 minutes, prayed with the pastor and talked with students before quietly leaving. The family said at this point they are not ready to talk to the media, they are just too upset.

Chris' sister was so distraught that she didn't come with her parents for the prayer vigil Monday morning.

Stay with ABC 57 News as we continue to follow the latest details on this developing story.