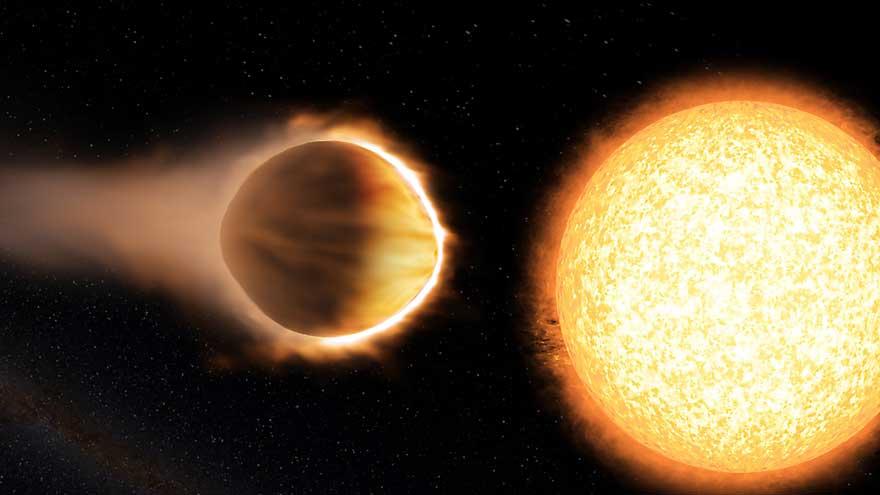 (CNN) -- When astronomers looked toward the planet WASP-121b, they were searching for evidence of an atmosphere. What they didn't expect to see was a stratosphere made up of water so hot, it was glowing.

The stratosphere is a layer of atmosphere where temperature increases at higher altitudes. On Earth, ozone in our stratosphere captures UV radiation from the sun, warming that layer. Elsewhere in our solar system, methane warms the stratospheres of Jupiter and Saturn's largest moon, Titan.

But detecting these layers around exoplanets has been tricky.

WASP-121b, which is 880 light-years away from us, is considered a hot Jupiter-like planet. It has a greater mass and radius than Jupiter, making it "puffier."

Astronomers now have the strongest evidence yet that hot Jupiter-like exoplanets have stratospheres.

"The question of whether or not stratospheres form in hot Jupiters has been one of the major outstanding questions in exoplanets since at least the early 2000s," said Tom Evans, research fellow at University of Exeter. Evans is also the author of a new study on WASP-121b, published in the journal Nature this week.

Astronomers studied WASP-121b with both the Hubble and Spitzer space telescopes to learn more about the planet and analyze how the planet's brightness changed at different wavelengths of light.

The researchers compare the water molecules to fireworks, whose colors come from chemicals emitting light. These water molecules were giving off radiation in the form of infrared light, which humans can't see. But Hubble could.

Hubble detected the glowing water molecules in the atmosphere, implying that the upper layers were hotter than the lower layers, to indicate a stratosphere.

Why are the water molecules glowing?

If WASP-121b were any closer to its host star, it would be ripped apart by the star's gravity. The top of the planet's atmosphere is heated to 2,500 degrees Celsius -- so hot that iron can exist only as a gas, instead of a solid.

Exactly how the stratosphere can remain intact at such a high temperature is something the researchers want to investigate.

"We think there must be something heating the upper atmosphere of WASP-121b to cause the stratosphere, but we currently don't know what it is," Evans said. "On WASP-121b, the temperature is too high for ozone, but perhaps there's some other type of gas performing a similar role."

Two possibilities that have been suggested are titanium oxide and vanadium oxide gases, which could survive the high temperatures of WASP-121b's atmosphere. They could also absorb starlight, raising the temperature of the stratosphere. But they haven't been detected, so further observation is needed, Evans said.

Needless to say, just because this exoplanet has an identifiable stratosphere doesn't mean it can support life. But being able to study hot Jupiters and search for atmospheres and stratospheres with the current technology could lead to something even more exciting.

"The ultimate goal of many of us working in the field is to try (to study) smaller, cooler planets more similar to Earth, where we hope to search for evidence of life," Evans said. "Refining our observational methods and theoretical understanding on the hot Jupiters is an important step on this long and exciting path. And of course, hot Jupiters are also interesting for their own sake!"

Future telescopes in space and on the ground, like the James Webb Space Telescope and the Extremely Large Telescopes on Earth, could help with this search around Earth-size exoplanets. James Webb could also provide a more intricate look at exoplanets like WASP-121b, like determining molecules besides water vapor in the atmosphere.

Next, Evans and his fellow researchers want to use Hubble for a more detailed observation as WASP-121b fully orbits its star across 1½ Earth days and how the planet changes from dayside to nightside.

The methods Evans and his team have used are paving the way toward understanding exoplanets and their atmospheres.

"I, like many in the field, am excited and impatient to study the atmospheres of smaller, cooler planets that could potentially be habitable, because I want to know how common or rare life is in the galaxy," Evans said. "But observations like this one we've just made for WASP-121b remind us that there's still so much we don't yet understand about the hot Jupiters, which are the easiest to study due to their large sizes and temperatures.

"So in the coming decades, as we increasingly focus our observations towards more Earth-like planets, I'd say it's important to also keep paying attention to the diverse population of gaseous planets that we're discovering. The atmospheres of these planets will undoubtedly throw up surprises, and we've still got a very long way to go before we can say we truly understand their atmospheres."