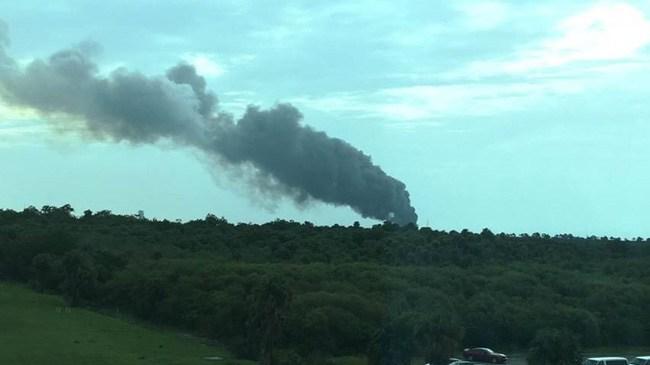 NEW YORK (CNNMoney) -- A SpaceX rocket exploded at its Cape Canaveral launch pad Thursday morning during a test firing, destroying the rocket and the satellite it was due to launch on Saturday.

SpaceX said there were no injuries as a result of the explosion, which it described as an "anomaly."

It happened at the Space Launch Complex 40, according to Kennedy Space Center's Stephanie Martin. That launchpad is used by SpaceX to launch rockets that carry supplies to the International Space Station as well as satellites.

The rocket was carrying a private satellite that was to be launched in a partnership between Facebook and French satellite firm Eutelsat Communications to bring internet access to Africa, the Middle East, and Europe. The satellite, called Amos 6, was owned by Israeli company Spacecom, which contracted with SpaceX to carry it into orbit.

"We are disappointed by the loss but remain committed to our mission of connecting people to the Internet around the world," said a statement from Facebook.

Launch Complex 40 is an Air Force facility which has been leased to SpaceX. The company has launched 25 rockets from the site since 2010. Its rockets have carried supplies to the International Space Station as well as satellites.

SpaceX is trying to change the economics of space flight by developing rockets that land upright after launch and can then be reused. It has yet to carry any people into space, though it has won a contract from NASA to carry American astronauts to the space station in the future. SpaceX had been expected to receive flight readiness certification from NASA for those manned flights by late 2017.

"It is too early to know what impacts there would be (with the manned flights) and it would be inappropriate to speculate at this time," said Kennedy Space Center's Martin. NASA remains confident in its commercial partners, including SpaceX, she said.

Even before Thursday's explosion, SpaceX had contracted with NASA to use a different launch pad at Cape Canaveral for future launches. That new launch pad, Launch Complex 39A, had previously been used for space shuttle launches. SpaceX has been working to upgrade that facility.

SpaceX CEO Elon Musk, who also is CEO of electric car maker Tesla, has said he hopes the company will be able to take people to Mars in as soon as 2025.

But amid these ambitious plans, the company has also suffered setbacks. A rocket explode during a launch in June of 2015 on one of its ISS supply missions. It was later determined that a strut that held a helium tank in place had failed, causing the explosion.

It has also lost several rockets when it tried to land them upright on an ocean platform at the end of a flight.