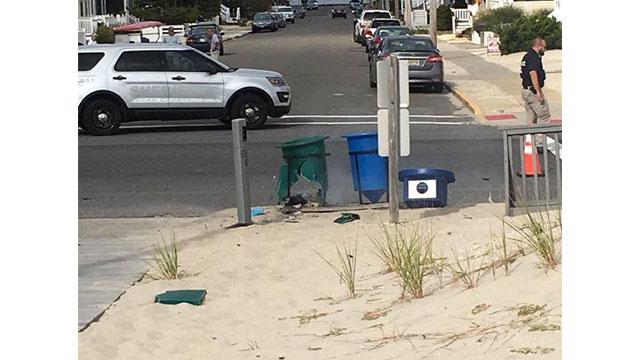 (CNN) -- An explosive device went off Saturday in a garbage can on the boardwalk in a New Jersey beach town along the race route for a Marine Corps charity run, authorities said.

A second suspicious device was reportedly found, and bomb dogs are searching for any additional ones, authorities said.

The explosion occurred in Seaside Park. No injuries have been reported, the FBI said.

According to the Ocean County prosecutor's office, the race was delayed, which "thankfully avoided a large number of runners in the area."

A Seaside Semper Five race volunteer told CNN's Anne Woolsey that police and local law enforcement made the decision to shut down the race.

"We encourage everyone to stay away from the vicinity and allow law enforcement to render the area safe," the official said.