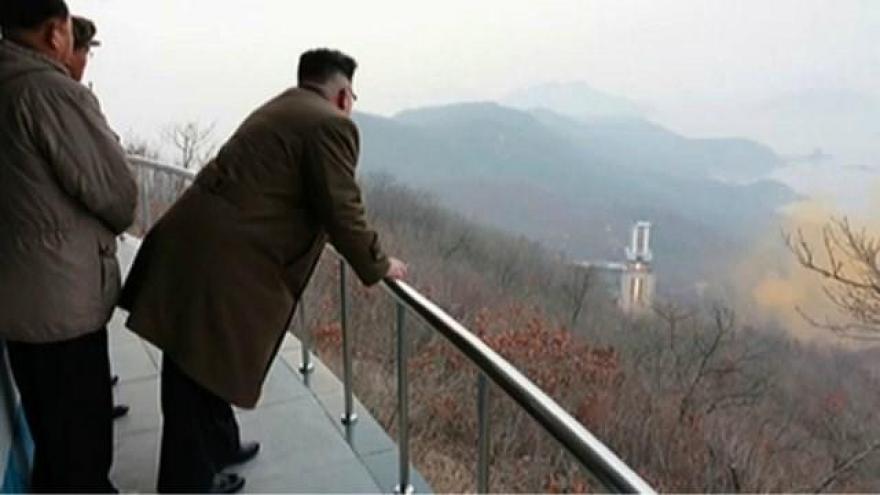 (CNN) -- A North Korean missile fired Wednesday exploded "within seconds of launch," according to US Pacific Command.

US officials confirmed North Korea had attempted to launch a missile near Kalma, on the country's east coast, but early reports suggest it failed.

"South Korea and the US are aware of the missile launch and to their knowledge North Korea's missile was not successfully launched," South Korea's Ministry of Defense said in a statement.

Neither the US nor South Korea have released information on what type of missile was fired, or why it failed. The US Pacific Command said it was working with partners to assess it further.

At a daily press briefing Wednesday, China's foreign ministry spokeswoman Hua Chunying again called on all parties on the Korean Peninsula, including South Korea and the United States, to "exercise restraint."

"The current situation on the peninsula is extremely tense -- 'everyone with his dagger drawn' would be a fair description," she said.

The attempted launch comes four days after the North Korea announced it had tested a new rocket engine, describing it as a "great leap forward" in their missile program.

US defense officials told CNN the engine could be used for a long-range intercontinental ballistic missile.

North Korea's 'signal' to the South

Against the background of the launch, South Korea and the United States continued their annual "Foal Eagle" military exercises, which often provoke retaliation from the North Koreans. The "Foal Eagle" exercises began on March 1 and will end on April 30.

Robert Kelly, associate professor of political science at Pusan National University, told CNN the latest launch was a "signal" to South Korea from their northern neighbor.

"The North Koreans respond to (the drills) almost every year with some kind of outlash or provocation or something like that," he said. "Missile tests are a nice way to send a signal."

Speaking to reporters, Hua reiterated China's proposal for an end to the US-South Korean drills in exchange for North Korea halting its nuclear program.

"We consider (the proposal) the only correct, fair and reasonable way out of the current dilemma ... As the saying goes, 'let he who tied the bell on the tiger take it off'," she said.

Second launch in a month

It isn't the North Korea's first launch this month -- the country fired four intermediate-range ballistic missiles on March 6, which fell into waters off Japan.

Three of them landed less than 200 nautical miles off the Japanese coast, antagonizing the South Korean and Japanese governments.

At the time, experts told CNN the rapid series of launches indicated North Korea was speeding up their weapons program, deploying and developing missiles faster.

"They did a launch (in February), they're now launching more in 30 days. That's a third of the time they used to need," Carl Schuster, a professor at Hawaii Pacific University, told CNN at the time.

In February, a senior Trump administration official told reporters the US President believed North Korea was the "greatest immediate threat" to the United States.

Kelly said the US was still struggling to find a way to rein in North Korea's aggressive behavior.

"Ideally we'd find a diplomatic solution, but the North Koreans have to be willing to come around or the Chinese have to twist their arm and that's what everyone is hoping," he said.

North Korea's missile program may be accelerating quickly but there have been stumbles along the way, especially with its attempts to launch Musudan missiles.

Two missiles, thought to be Musudans, failed to launch successfully within one week in October.

The previous June, of two missiles launched, one didn't make it further than 150 kilometers (93 miles). The other flew 400 kilometers (250 miles) before falling into the Sea of Japan, also known as the East Sea, which North Korea claimed was a success.

Still, both of those were more successful than North Korea's launches earlier in 2016.

In May, one Musudan flew for about two seconds before exploding, while an April launch was described by the Pentagon as a "fiery, catastrophic failure," according to CSIS.

Even the four missiles launched this month, which North Korean leader Kim Jong Un appeared to celebrate in state media photos, didn't go off without a hitch -- a fifth missile failed to launch as planned.

At the time, a US official said the projectiles involved in that test were extended-range SCUD missiles.

Correction: This article has been corrected to refer to Hua Chunying as a foreign ministry spokeswoman.