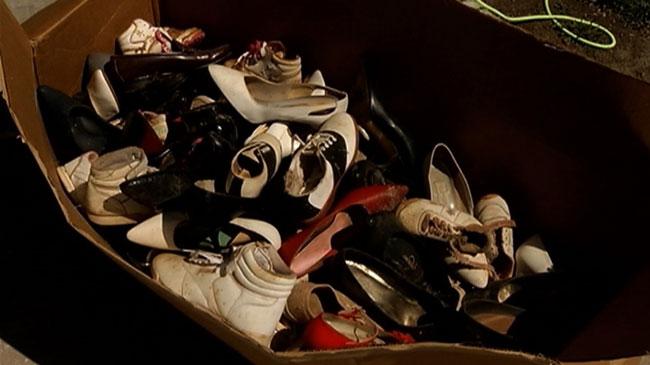 Gladwin County, MI (CNN/WNEM) -- A local family isn't sure what to think after discovering a hidden wall stacked with women's and children's shoes.

The family, who lives in the Gladwin County community of Bentley, said they were cleaning out their pole barn when a family member found a hidden or fake wall behind a closet.

When they were able to pry it open they found 53 pairs of shoes. Bras were also found stuffed in some of the footwear.

The family said they have owned the property for eight years, but never noticed anything unusual until a crack recently appeared in the drywall.

The Michigan State Police have been called to investigate. They told the homeowners they don't believe the shoes are linked to any crime, instead they may be some sort of fetish.

The homeowners have already sealed up the fake wall.

"We were creeped out at first," said Gwen Skover, homeowner.

The shoes were found on a secret shoe rack that was possibly hidden for decades inside the walls of the closet in the Skover family's pole barn.

Skover said it's likely the shoes and bras date back to the 1970s, a time when a man's hidden fetish might seem more taboo.

"I want to say maybe somebody having their little thing in the garage privately, maybe not open to the world," Skover said.

She said she plans to haul the findings to the trash.