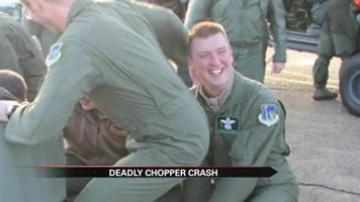 ROLLING PRAIRIE, Ind. --  Air Force Technical Sergeant Dale Mathews, 36, a Rolling Prairie native, was killed along with 3 other United States airmen in a helicopter crash on the Norfolk Coast of England Tuesday night.

Mathews’ cousin Lorie Deneve-Cowgill said she has not received official word on the investigation of how he died, however British media is reporting the crash may have been caused by a bird strike.

“He died doing what he loved. He was serving this country so that you and I could go to bed at night knowing that we are free,” said Deneve-Cowgill.

Deneve-Cowgill said she is so proud of her cousin who has been a Technical Sergeant in the Air Force for half of his life.

He was killed along with three other United States military men Tuesday around 7 p.m. when his helicopter crashed during a training exercise at a nature preserve in England.

“My teenage son was driving me to the store last night when my mother called me crying and told me that there had been a helicopter crash and that Dale had been killed instantly,” said Deneve-Cowgill.

Deneve-Cowgill can still remember when her cousin first joined the Air Force when he was just 18-years-old.

“He was also really good friends with my husband.  They joined the military right after high school together,” said Deneve-Cowgill.

She said Mathews was a compassionate man who was proud to serve our country and came from a military family.

“My brother was killed when I was a freshman and Dale just encircled my sisters and I.  He was the friend we needed,” said Deneve-Cowgill.

Cowgill says she is praying now for Mathews’ parents, wife and his two children ages thirteen and fifteen who will always remember their father as a hero.

Mathews was set to retire from the military this April.