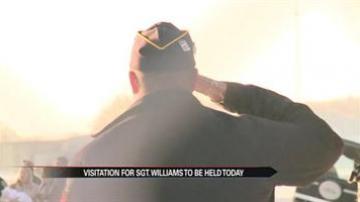 GRANGER, Ind. -- A fallen soldier from Elkhart is being remembered Thursday and Friday.

The visitation for Army Staff Sgt. Jesse Williams, who was killed last month in a helicopter crash while serving in Afghanistan, is set for 4pm Thursday at Granger Community Church on 630 University Drive in Granger.

Sgt. Williams' funeral will follow on Friday, with visitation starting at 11am and the service beginning at 1pm. This event is also being held at Granger Community Church.

ABC 57 was contacted by Westboro Baptist Church. They tell us that they plan on protesting outside of the church during the funeral service.

ABC 57 also received confirmation that the Indiana State Police will be on hand at the event as well.

Since 2006, disorderly conduct within 500 feet of a funeral has been considered a felony offense in the state of Indiana; one that's punishable by a $10,000 fine or up to years in prison.

As of Wednesday, the anti-gay group still has yet to acquire a protest permit from St. Joseph County.

There's plans to hold a dinner after the service. It's expected to be held at the Disabled Americans Veterans Chapter 19 on Middleton Run Road in Elkhart. They're preparing to host 200 people.

Organizers of the dinner have said that they've already received some food and financial donations over the past several days, but more is still needed.

If you wish to donate, please contact event organizer and Williams family friend, Angela Felder at (574)-370-4068. You can also find Felder on Facebook and contact her through a private message.