Fallen soldier's funeral expected to draw many from near and far 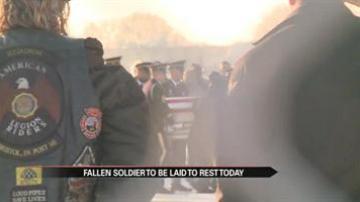 GRANGER, Ind. -- Family and friends will come together Friday to say a final goodbye to a fallen soldier. US Army Staff Sergeant and Elkhart Native Jesse Lee Williams, 30, is being laid to rest.

His final visitation is set to begin at 11am at Granger Community Church, located on 630 University Drive in Granger. The funeral service will start at 1pm, also at GCC.

Sgt. Williams is 1 of 6 soldiers that died during a helicopter crash in Afghanistan on December 17th, the cause of which is still being investigated at this time.

Hundreds are expected to be in attendance at the event, with some traveling from as far away as Germany to pay respect to Sgt. Williams.

ABC 57 spoke with GCC Pastor Mark Waltz who said that his church's auditorium is prepared to hold up to 1,500 people.

The interment will follow immediately after the service. It will be held at Rice Cemetery on James Street in Elkhart.

The funeral procession route going from the church to the cemetery is posted below: