Family and Community react to young man's death in Elkhart 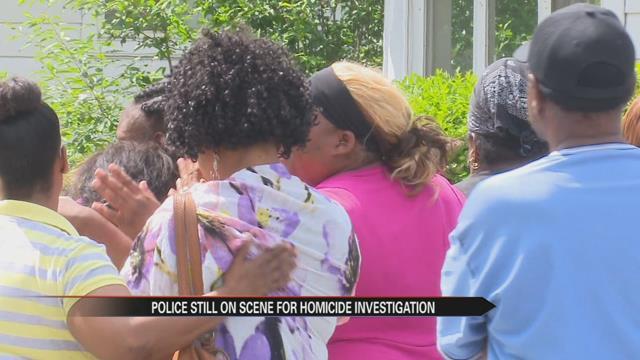 On Thursday, a young father’s body is found on Elkhart’s south side around 3:30 a.m.

Brandon Jackson, 24- years-old of Elkhart, was shot and killed in a home on Garfield Avenue.

Police spent over half a day inside that home and removed Jackson’s body around 4 p.m.

Police have not named a suspect, neighbors are scared that a violent killer is still on the street, and family is in mourning after this loss.

She wipes her tears away at the thought of not being able to celebrate any more of her nephew’s birthdays.

With family too emotional to say more one friend says how she will remember Jackson.

“He was a good guy, laid back chill. I don’t know who would want to hurt him but it’s just all shocking,” says Candace Woods, Jackson’s Friend.

Candace Wood’s feelings are shared by many others posting R.I.P on Jackson’s Facebook.

Police say canvassing the scene of a young man’s unexpected death is something they will never get used to.

“What’s strange is we have a 24 year old that was killed and ya know that’s sad,” says Sergeant Chris Snyder, Elkhart Police Department.

Sergeant Snyder says around 3:30 a.m. on Thursday police received a 9-1-1 call about a shooting on Garfield Avenue near the intersection of Ashland Avenue.

They found an apartment door open and once they were inside they found Jackson’s body; he had been shot.

One neighbor says they heard multiple gun shots but did not see anything while they were ducking for cover.

Michael Anderson and some of Jackson’s family members say he did not live in the home where he was killed.

Officers searched the scene thoroughly for hours looking for clues to figure out who pulled the trigger and killed a young father.

“We hope to get some more information and evidence that will lead to the arrest of who ever committed this crime,” says Sergeant Snyder.

Contact the Elkhart Police Department with any information that could help solve this crime.