Family and friends protest for "Justice for Corey" 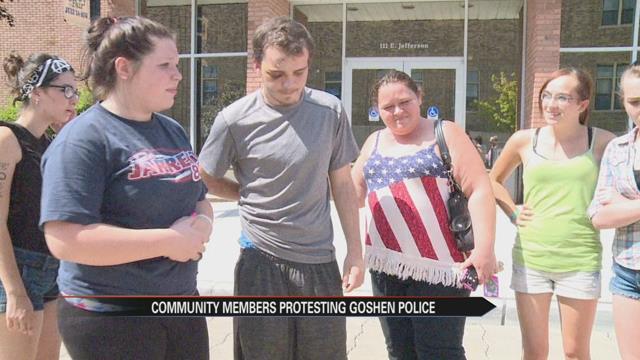 Friends and family of one of the three people the hit by a car at Taco Bell last week held a protest Monday outside of the Goshen Police station.

Friends and family are demanding that police press charges against the driver of the vehicle that crashed into Taco Bell.

Police say they have not charged anyone for this incident because they say the driver did not do this intentionally.

Last week, Goshen Police said the incident was the result of previous “run-ins” the driver and her passenger had with a group of males who were approaching her vehicle.

“These people can go up to Taco Bell, commit attempted murder, run them through Taco Bell, put my nephew with fractures in his head on his skull, puncture his lung, and they come up here and tell them ‘oh it was a freak accident’ and they let him walk out,” said Corey’s aunt Linda Caldwell.

Hamlett was released from the hospital while the protest was underway.

He stopped by to see his family, but was not feeling well enough to stay.