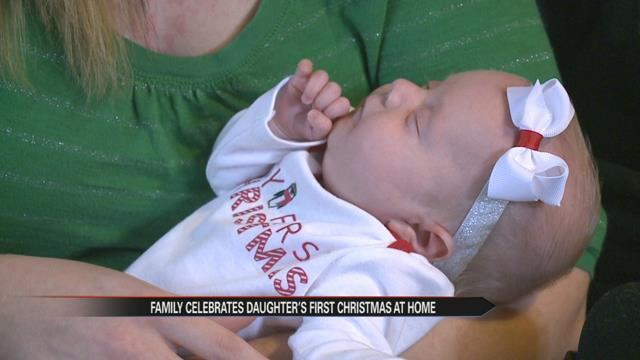 A Michiana couple is welcoming home their baby daughter for the first time after over 100 days in the hospital.

Each Christmas, the Overmyers give members of their family an ornament that symbolizes a part of that person’s year.

For a baby girl named Hayden, 2015 has been a struggle.

“It was definitely one of the scariest things, hearing all the worst statistics,” said Briana Overymyer, Hayden’s mother.

“She’s not supposed to be here another 3 months, and you’re getting all these crazy numbers thrown at you, it’s a lot to take in,” said Colton Honeycutt, Hayden’s father.

Hayden spent over one hundred days in the hospital before finally going home.

“I was holding her and she stopped breathing, they rushed her out of my arms and made me leave the room and that was the scariest thing I’ve ever been through,” said Overymyer.

But the worst days during that long stay at St. Joseph Medical Center were made easier knowing the family had already been through this once before.

“I’ve got a 14 year old who’s grown up hearing about these stories. If it was acceptable I wanted him to see what it was like when he was born,” said John Dowell, Hayden’s grandfather.

14 years after his son was born premature, John Dowell had to watch his first grandchild fight through the same thing.

“It’s still difficult to watch, to be on the sideline,” said Dowell.

But now his two fighters, his son and granddaughter, will share an unbreakable bond.

Hayden’s parents say her daughter now weighs 8 pounds, 4 ounces and her family says they are very happy with her progression.