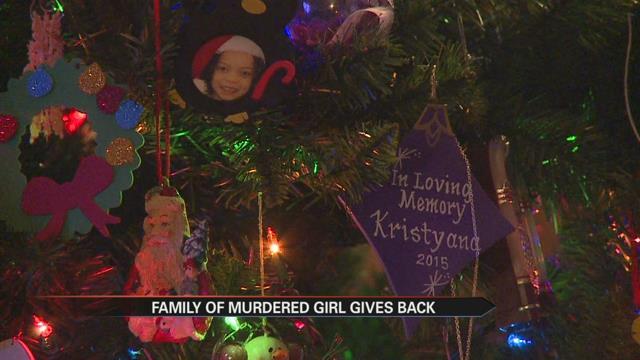 It’s been nearly three and a half years since the murder of 7-year-old Kristyana Jackson. Her mother Kimi Jackson says the holiday season is always especially tough on her and the family.

“We have that one piece missing, and it isn’t a piece of a puzzle. It’s like a piece of a jewel,” said Kristyana’s aunt Judi Ballard.

Kristyana was shot and killed in 2012 in an attempted home invasion.

Police still don’t know who is responsible for her murder.

But the family is making sure everyone knows the greatness that was her life.

"Every year we would go through her toys and she’d go ‘Mama I’d give this to someone who doesn’t have toys,’" said Jackson.

To keep Kristyana’s giving spirit alive; the family has been buying presents and collecting donations to give local families in need of Christmas. They call the project Kisses for Kristyana.

They are providing two local families with Christmas trees, holiday meals, presents and necessities to use throughout the year.

“It just makes me feel good to do this in her name. It’s just the small things and I definitely know that since she’s been gone it’s what I really miss about her,” said Jackson

And even though they’ll always be missing Kristyana, Jackson and Ballard say they still feel fortunate for what they have,

“I hope for people just to take the time and look around to see what they have, and what could be easily taken tomorrow,” said Ballard.

Jackson and Ballard say they are in the process of making Kisses for Kristyana a non-profit foundation where they will help kids in need year round.