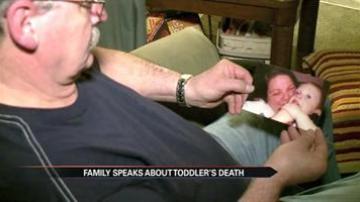 MICHIGAN CITY, Ind. -- The father and grandfather of a 3-year-old who police say was shot and killed by the boyfriend of the boy's mother spoke exclusively with ABC57 about wanting justice for little Lance Wilson.

Zachariah Grisham is accused of shooting 3-year-old Lance Wilson during a "game" that went horribly wrong.

Grisham was charged with neglect of dependent resulting in death and reckless homicide and is out on bond.

For the family of Lance Wilson, the last few months have been the hardest in their lives.

In September, Lance was shot and killed.

Grisham told police he didn't think the gun was loaded when he aimed the gun at Lance and pulled the trigger.

"It's the craziest thing any parent can go through," said Lance's father, Paul Wilson II.

He questions how Grisham got a hold of a loaded gun to begin with.

"With him being on an ankle monitor we can't understand why he was able to have access to a gun," said Paul Wilson Sr.

Right now, they just want the truth as they grieve the loss of a little boy who had a whole life ahead of him.

"I can't believe they're telling me so many different stories on what happened. I still don't know the truth," said Paul Wilson II.

The father and grandfather are not happy Grisham just faces neglect and reckless homicide charges - and is out of jail.

"This is not just child endangerment. He put a gun to a kid's head and pulled the trigger," said Pau Wilson II.

"We can't understand why he's not locked up where he should be," said Paul Wilson Sr.

Last week the family did appear in court.

Grisham's attorney didn't show up so the court date was rescheduled.