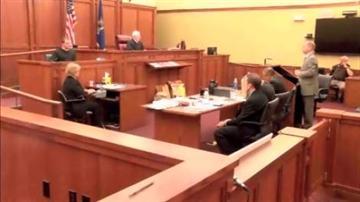 CASS COUNTY, Mich. -- In the fourth day of testimony in the double murder trial of Keith Lintz, family members, friends and coworkers testified about how they learned of the deaths of John and Carolyn Tarwacki in February 2010.

Family and friends testified Thursday about the last time they saw Carolyn and John Tarwacki.

"I said I love you, bye; and that was it," said Kelan McKnight, John and Carolyn's nephew.

Carolyn's boss also testified. He said he wondered why they were late that morning.

"She was so dependable that I knew there was something. It was just unlike her," said John Shaffer, Carolyn's boss.

Family members testified about learning the terrible news as the day progressed.

"All he just kept yelling is that they were dead. That's all I knew," said Danielle Tarwacki, John's sister.

"I was devastated," said Kelan.

"My co-workers came and helped me and brought me home," said Sharon McKnight, Carolyn's mother.

The jury also heard about how Sharon McKnight found what police believe is one of the weapons used in the murder.

She was cleaning out a freezer at Carolyn and John's home months after the attack.

"There were bags of frozen foods in there, vegetables and stuff; and I started to pull them out and when I did, I saw the knife. There was a knife at the back of that freezer," said Sharon.

One of the witnesses who testified Thursday was Lintz's ex-girlfriend, Karessa Warner.

Warner described a conversation she had with Lintz a few weeks after the murders.

She said she confronted Lintz about the murders and he told her the only reason he was the number one suspect is because they had his footprints in the snow.

She also testified that he denied committing the murders.