Family relieved to have closure in Mark Miller's murder 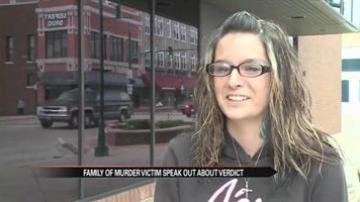 ELKHART, Ind. -- Two and a half years after Mark Miller was murdered, his family finally has justice. Todd Stewart was convicted of killing Miller. His ex-wife spoke to ABC57 about the verdict.

Melissa Martin is Miller's ex-wife. She says she and her two sons met with a counselor on Friday who helped try to explain to the two young boys how their father died.

Martin says it has been difficult to try to explain the gruesome facts to a 6-year-old and an 8-year-old.

"It's almost impossible. You know I tell them we are going to fight until these people are punished. We're not going to give up, and to stay strong. That no matter what their dad is always going to be with them in their heart," said Martin.

On Thursday 36-year-old Todd Stewart was convicted of murdering Miller.

In September of 2012, Miller's body was found in a barrel that had been dumped in the St. Joseph River.

Martin says the conviction is the first bit of peace she's felt in the 2 and a half years since he was killed.

"Finally a sense of closure. I feel like I can breathe," said Martin.

Martin and Miller have two sons together. Martin says her 6-year-old son Jayden wants one thing for his birthday on Saturday.

"Right now he wants his dad to take him fishing, that's all he wants. And I have to look at him and tell him he can't because Todd took his life," said Martin.

Jayden opened up and commented on Stewart's conviction.

"Initially I thought when this first started I didn't want a death sentence I would rather have a life sentence, so that he would have to live with that. But now just seeing him with no remorse, I'd assume he'd be dead," said Martin.

Although Martin feels like justice has been served, she said she believes more people were involved in Millers' murder.

"There's more to the story. And I would hope that knowing that, they would continue to try to figure it out," said Martin.

As for motive, Martin said she feels like Stewart had just one.

"Jealousy, That's all I can think. He wanted Mark's life," said Martin.