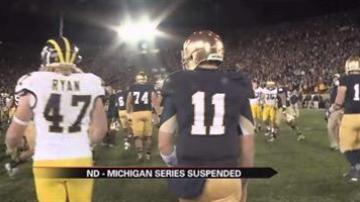 It's a history that creates an indescribable hype, and soon it may become just that: history.

"It's like one of our biggest rivalries and it's always a fun game as evidence by Saturday, it was literally the best day of my life," said one Notre Dame senior of Saturday's Notre Dame vs. Michigan game under the lights.

In their 40th meeting, the Irish and Wolverines failed to disappoint another record turnout. Even days after the Irish win, fans are still soaking in the glory of victory.

"I think everyone was just excited about beating Michigan in general, so it's great to be a part of the tradition," said Olivia Gardner, a Notre Dame graduate student.

But on Tuesday, to the surprise of students and fans, the universities announced the series will be suspended.

"[It] kind of sucks because we've been playing them for years and to not play them anymore is just not keeping up with the tradition," said a Notre Dame senior.

The announcement comes just two weeks after Notre Dame agreed to join the Atlantic Coast Conference, locking the football program into 5 ACC matchups per season. The Michigan series suspension is the first of what is sure to be more changes to come. But, not all fans are unhappy.

"Traditionally, it might not be as big of a deal as we think it is. I'm excited to start playing other ACC schools like Florida State which is looking really good right now, " said Parker King, a Notre Dame graduate student.

With the taste of victory still fresh, some fans are just pleased to go out on a high note.

Notre Dame will play Michigan at Michigan next season and Michigan will come to Notre Dame in 2014. The series is suspended for 2015,2016 and 2017.