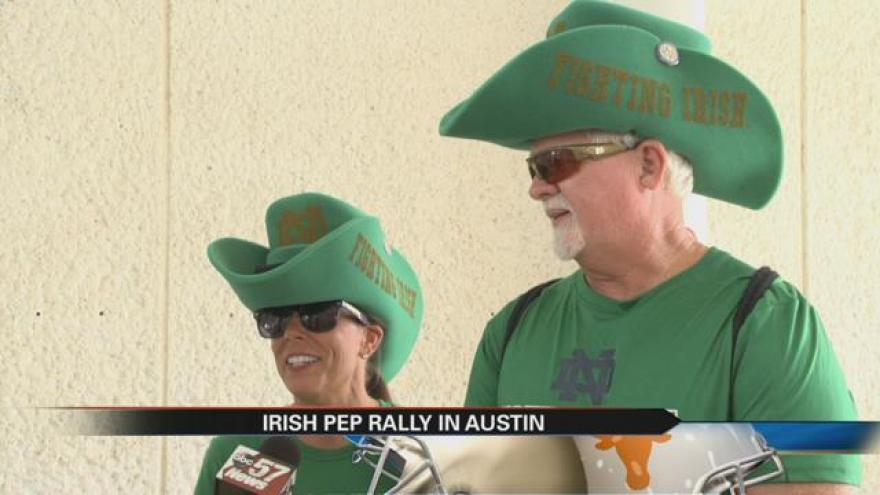 ABC 57 News is in Texas at the official pep rally hosted by the Notre Dame club of Austin, where things are really starting to get going. Cheerleaders, the leprechaun, and former Irish players: Mike Rosenthal, Bobby Taylor, and Reggie Brookes are all slated to take the stage tonight as well.

The Notre Dame Alumni Band got the Irish faithful fired up. Fans of all ages from all parts of the country, came together to get ready for Sunday’s big game between Texas and Notre Dame.

One die hard couple from Texas tells us they drove four hours to be here this weekend and will make the trip to South Bend next week.

"I was the only one in my family born Irish I guess. And those gold helmets set me off from day one and then she married into it and became a Notre Dame fan," said Russ Gloede.

There's a lot of Notre Dame fans here. In fact, at least 75% of the passengers on ABC 57’s flight were Irish fans, including the cheerleading squad, leprechaun, and former Irish running back and current radio color-man, Allen Pinckett.

The team arrived last night, and this morning the Irish had a light practice and a walk-through at the stadium.

Then the guys were given some down time to watch college football. Coach Brian Kelly said the game he'll be tuning into is the USC  vs. Alabama match-up.

The players say it will be cool to casually watch games on TV like any other football fan.

"Actually, it will be a fun change of pace I think. Like I said to somebody else, it might be nice to catch a few hours of game day in the morning or something like that. But I mean, we're not really worried about that too much. We still have a lot of preparing to do, obviously sewing a lot of things together. We still have a lot of preparation until kickoff on Sunday," said Mike McGlinchey, Notre Dame senior offensive lineman.

While there is a full slate of games today, on Sunday, the Irish and Longhorns are the only game in all of college football.