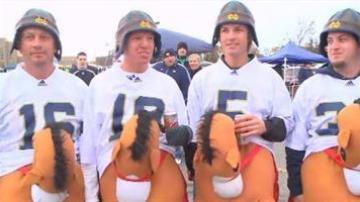 South Bend, IN -- Games, food and rooting for your favorite team; the essentials to having a successful tailgate.

But for Mark Debniak, those things are just part of what makes today so special.

His son, Alex Debniak, plays outside linebacker for the Stanford Cardinal.

"It's a lot of fun," Debniak said. "He's a fifth-year senior, so this is it for us. We're out on the west coast pretty much every weekend, so Notre Dame is kind of a homegame for us."

He's always enjoyed watching the Cardinal take on the Fighting Irish, but this year means a little more.

With Notre Dame ranked higher than they've ever been in the last four years, both teams' reputations are at stake.

"This rivalry has gone on for a long time, and we're very appreciative of it," Debniak said.

Some Irish fans went all out for the tailgate.

Scott Smith and his buddies dressed up as the legendary Four Horsemen to mark the special game.

"It's tradition," Smith said. "We come to the games, and just decided to get creative and have some fun."

Part of that fun includes posing for pictures.

"We'll take about ten steps, stop for 20 minutes, take pictures of front and back, take another ten steps and repeat the process," Smith said.

But Smith and others don't mind.

The Cardinal and Fighting Irish have played one another since 1925, so tradition is something fans cherish deeply.

"It's going to be a big challenge," Debniak said. "We've kind of had Notre Dame's number for the last three outings, so we're expecting a hell of a game."