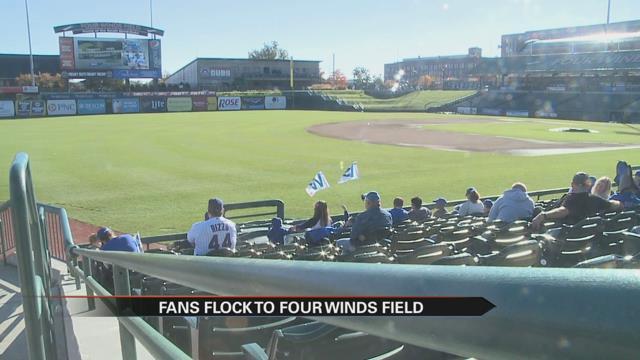 If you couldn’t make it to Chicago on Friday, you may have been at Four Winds Field.

The South Bend Cubs hosted a party of their own Friday morning into the afternoon, giving fans the chance to see a parade, 108 years in the making, on the big screen.

The South Bend Cubs season ended months ago, but the Chicago Cubs are World Series champions and that means fans are still flocking to Four Winds Field all the way into November.

What better way to watch the parade on TV, than at a baseball stadium with other die-hard Cubs fans.

On Friday, Four Winds Field opened their gates, welcoming in a nice crowd to watch the Chicago Cubs championship celebration.

“I brought my son Johnny probably the number one Cubs fan I know or Kris Bryant fan I should say. Absolutely phenomenal watching the game through his eyes and really the whole season has been great coming out here to Four Winds Field,” said Mark Diroll, a Cubs fan from South Bend.