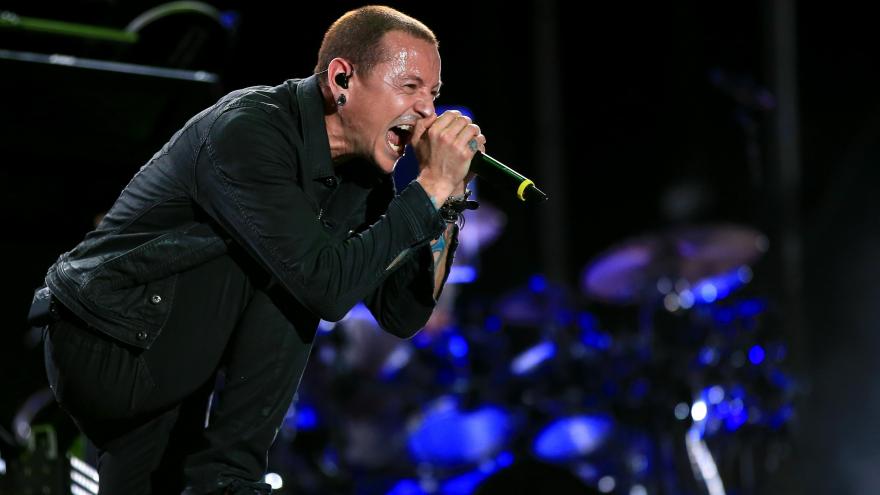 (CNN) -- Linkin Park is marking the second anniversary of frontman Chester Bennington's death by asking fans to to share their memories of the beloved rock singer on Twitter.

"Remembering Chester today," the band wrote on Twitter. "Feel free to share your favorite photo or video of Chester / LP below."

Thousands of fans responded with personal photographs and stories of the times they met Bennington and how he impacted their lives.

'I miss him very much'

One fan, who goes by the name Brown Sugar XOXO on Twitter, shared a photo of Bennington and himself standing together. He included a short story about how they met by accident at Disneyland.

"He was with his family yet told me he would wait for me after the ride ended so we could chat and have a picture ... he kept his word," the fan said.

Maria Ruiz, another fan, said meeting Bennington is her "most treasured memory."

In another post, a proud father recalled the time his children met Bennington, who signed their t-shirts. "They will never forget meeting a rock legend," he wrote.

Chasy, a German fan, shared a short video from a Linkin Park concert she attended in Berlin. "His energy was contagious," she said. "I miss him very much."

Some fans even shared images of their Linkin Park tattoos, an everlasting tribute to the band and Bennington's influence and legacy.

"I got my very first tattoo, 2 years ago today," wrote Twitter user Gwen. "To honor and remember Chester forever when I look down on my wrist. His voice and music has been there for me my whole life. Thank you Chester and thank you Linkin Park."

The suicide rate in the United States has seen sharp increases in recent years. But studies have shown that the risk of suicide declines significantly when people call the national suicide hotline: 1-800-273-TALK.

The lines are staffed by a mix of paid professionals and unpaid volunteers trained in crisis and suicide intervention. The confidential environment, the 24-hour accessibility, a caller's ability to hang up at any time and the person-centered care have helped its success, advocates say.

The International Association for Suicide Prevention and Befrienders Worldwide also provide contact information for crisis centers around the world.