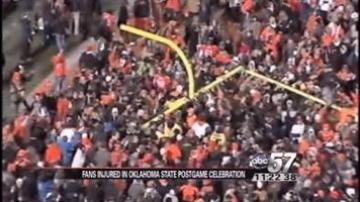 STILLWATER, Okla. -- At least 13 people are recovering after they were injured in a college football postgame celebration.

Thousands of fans rushed the field after No. 3 Oklahoma State defeated No. 10 Oklahoma last night in a 44-10 victory.

Fans even tore down the goal posts in excitement. Two people were airlifted, one was an adult who got sick early in the game. The other was a student injured in the celebration.

Six people have been treated and released with minor injuries. Two other were treated for ankle fractures.