Farm Supply store in Elkhart Country is broken into 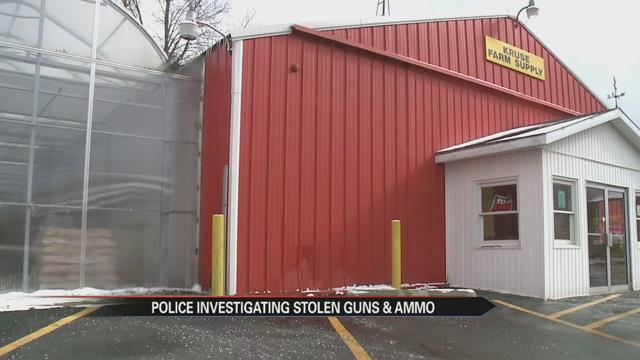 On Monday morning the owner of a farm supply store in Elkhart County walked in to find his store broken into. Several items were missing and some of those items could be dangerous in the wrong hands.

Two guns and several boxes of ammunition, a 27 inch television and several credit cards were all stolen.

Elkhart County Sheriff’s Department is not revealing any information regarding a suspect.

Steve Kruse, the store’s owner is doing his own investigating and says he’s gathered some info and surveillance video that he hopes can help get a thief off the streets.

Kruse says he used this information to track down surveillance video of this man using his stolen credit cards.

In the video the man uses Kruse’s credit to buy sunglasses. The man double checks with the cashier that he made the right selection and asks “Are these terrible?”

“Get a job there’s plenty of people looking for help. Get off your behind and get a job,” says Kruse.

Working at his store for 31 years, Kruse is frustrated that when he came in early Monday morning he noticed a door open.

“Knowing it wasn’t supposed to be like that I was a little cautious opening the door,” says Kruse.

No one was in the store but a sliding door was torn open. Kruse first noticed his T.V. was gone and so were the credit cards.

“To take care of something as petty as a theft, well it wasn’t petty with the other stuff they took,” says Kruse.

Two guns and several boxes of ammunition were also missing from the store.

On Tuesday Kruse realized he has serial numbers for the weapons.

“You should probably call around to the pawn stores,” says an employee.

With ways to track down the items stolen and the images of someone who may know something about the break in, Kruse hopes the public can help police solve the crime.

“But now we have everything more secure and locked down tighter it won’t happen again. But if someone were to get in again they won’t get away with anything like they did before,” says Kruse.

If you have any information, contact the Elkhart County Sheriff’s Department.