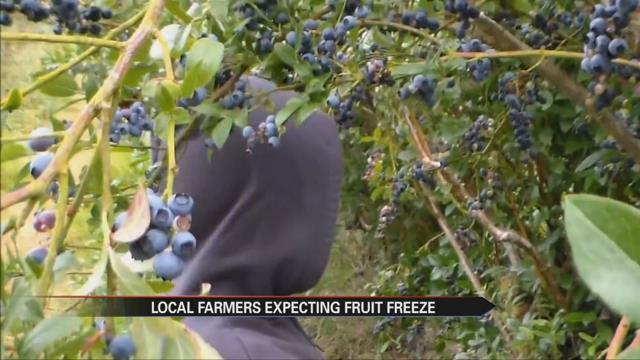 With temperatures expected to drop below 20° this week local produce could be affected.

Freezing temperatures in April are standard in Southwest Michigan but because of March’s mild temperatures buds bloomed sooner.

While crops can typically survive an April freeze, this year’s early growth has left some fruits like blueberries, cherries and peaches susceptible to damage from the cold.

A farmer of 60 years, Ralph Router says he’s seen both good and bad years but has learned to adapt.

“Last year was probably one of my better years. Just in Japanese plums alone, I probably harvested 20 tons,” said Router.

Router says on those better years, he keeps the bad years in mind and saves a portion of his profit.

“Just survive from one year to the next. We never know when a bad year is going to come around,” said Router.

Mark Longstroth is a small fruit educator with Michigan State University and helps farmers better prepare for potential issues. On Monday night he held his first meeting of the season in Coloma.

At Schilke’s Farm Market and Green House, owner Mike Shilke says he buys most of his produce from local farmers.

Schilke says even if they prepare for the weather, farmers may still experience damage to their crops. But others may benefit from less competition.

“That’s the name of the game, temperatures like what’s going to happen tonight may hurt some but it might be a blessing somewhere else,” said Schilke.