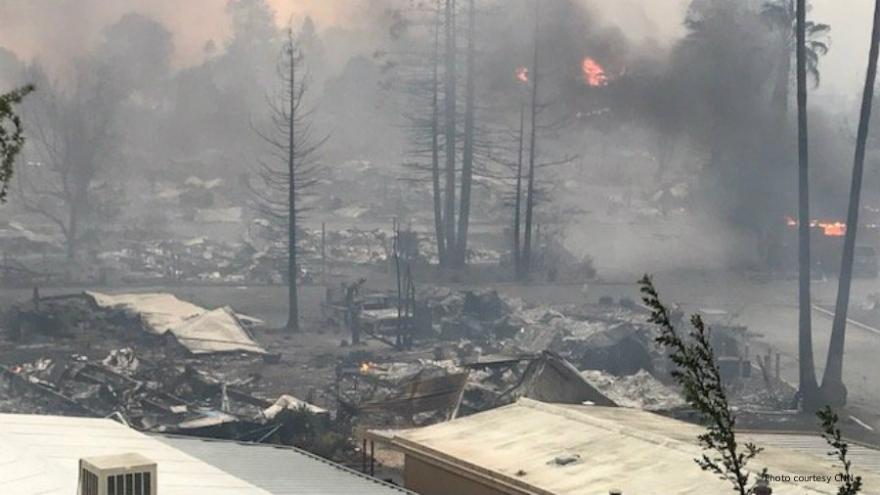 (CNN) -- Wildfires roared across California on Monday, forcing evacuations and destroying homes and businesses in their paths. The biggest fires burned in the wine country of Napa and Sonoma counties.

Here's what we know so far, according to California authorities.

• Ten people have died -- seven in Sonoma County, one in Mendocino County and two in Napa County.

• More than 100 people were being treated at Napa- and Sonoma-area hospitals for fire-related injuries or health issues including burns, smoke inhalation and shortness of breath.

• An estimated 1,500 structures have been destroyed and 57,000 acres burned in eight counties.

• A wildfire in Anaheim, in Southern California, has spread to 4,000-5,000 acres and burned at least six buildings.

The fires ignited Sunday night and Monday and spread with alarming speed because of dry conditions, Cal Fire Director Ken Pimlott said at a news conference. More than 20,000 people evacuated, some with little notice.

Jesus Torres of Napa said a neighbor called to tell him the fire was bearing down on his house, CNN affiliate KPIX reported.

"We gathered up a few of our things and our pets and headed out to our car," Torres said. "We could see the sky was turning red. ... We didn't know (about the fire) until the last second. There was smoke all over the area."

Marlene Rosenberg told KPIX she and her husband were preparing to leave their home early Monday near the Silverado Country Club, where a professional golf tournament had been played the day before

"The power was out so we had to raise our garage door by hand," she said. "When we pulled up the door, there was a fireman standing there. He said you go to go now."

A large section of Santa Rosa, a town of about 175,000, was evacuated, including Kaiser Permanente Hospital and Sutter Hospital. Photos and video on social media showed blocks of residences in ruins.

The Santa Rosa Press Democrat said the fire destroyed the Fountaingrove Inn, a 124-room hotel; a nearby event center, the Fountaingrove Round Barn; a Kmart store; classrooms at the Luther Burbank Center for the Arts; and restaurants like Willi's Wine Bar.

More than 100 patients were treated at Napa and Sonoma area hospitals because of fire-related injuries and issues, said Vanessa DeGier, spokeswoman for St. Joseph Health. Santa Rosa Memorial also accepted 12 patients from the two nearby hospitals that evacuated, including expectant mothers, she said.

"Our hospitals are beginning to see patients with injuries incurred as a result of evacuation. This includes victims of car crashes and injuries from falling," a statement from St. Joseph Health said.

Napa County is dealing with the biggest fires, Cal Fire said. The Tubbs and Atlas fires each cover about 25,000 acres. The Patrick fire west of Napa was at 3,000 acres.

The Nuns fire in Sonoma County covers 5,000 acres, and firefighters also are battling a 1,500 acre fire at Highway 37 and Lakeville Highway in Sonoma.

Alison Crowe, the winemaker for Garnet Vineyards & Picket Fence Vineyards in Napa Valley, said she has not been told to evacuate her home on the western edge of downtown Napa.

"A quarter of my co-workers have been evacuated," she said Monday. "I have friends fighting off fires with hoses in the hills. Thankfully a lot of my friends got out last night."

The main road through the area is still open but the aggressive nature of the blaze worries her.

"It's scary. We feel surrounded," she said.

Crowe estimated two-thirds to three-fourths of Napa's grape harvest has taken place. The 2017 harvest will be remembered for this fire, she said.

Authorities have not said what caused the fires, but noted that dry conditions made it easy for the fires to spread. October is typically the busiest month for wildfires in California, they said.

"As of right now, with these conditions, we can't get in front of this fire and do anything about the forward progress," he said, adding that resources from across California were to begin arriving in the area later Monday.

The fire spread smoke across the San Francisco Bay area and the Anaheim-area fire turned the sky red over Disneyland, according to a social media posting.

Firefighters may get a break from the weather on Tuesday, mainly with decreasing winds.

The National Weather Service in San Francisco on Sunday issued a "red flag warning" for the Bay Area because of current or impending critical fire weather conditions. The warning cited dry, "windy locations through the Napa Valley and northern Sonoma County valleys." Gusts ranging from 35 mph to more than 60 mph were recorded.

But "winds and the fire weather threat will decrease Tuesday in the north, but a threat will remain in Southern California," the weather service said.

Forecasters said the warning will likely remain in effect because of the warm and dry conditions and the presence of wildfires.

Veronica Ortega was at the Kaiser Permanente Hospital in Santa Rosa when she smelled smoke and saw flames through the window of her fiancé's room on the fourth floor.

The two soon were loaded onto a city bus and shuttled away.

Brian Alexander, a 34-year-old Santa Rosa resident, told CNN about stepping in to help his neighbors as the inferno surrounded his apartment complex.

He drove four neighbors to nearby shelters. As they fled the flames one of them told him, "There's no need to repent. Hell is already here."

"I couldn't live with myself if someone died or couldn't get help and I could have been there to stop it," said Alexander, who packed what he could into his car, eyeing his apartment one final time amid the ash and smoke that burned his eyes and made breathing difficult.

He later drove to Kaiser Permanente Hospital, where he works in environmental services, and began helping the hospital evacuate patients by moving gurney beds to the ambulances and city buses that were ferrying the patients to safety.

"In a situation like this, it is really important that we be the best we can be," he said. "There was no other option."

Alyssa O'Gorman and her family fled their home in the nick of time. As the flames closed in Sunday night, they left without a change of clothes. O'Gorman, her parents and her grandfather gathered their animals and were out of the house in minutes.

O'Gorman, a nursing assistant, was driving home from her job when she first spotted flames.

After evacuating the house, which sits at the dead end of a one-lane road in rural Napa County, she and her family watched from a distance as a propane tank exploded and their home's roof caught fire.

If O'Gorman hadn't been coming home from work to wake her family, "we would have been in the house trapped," she said.

Along with Kaiser Permanente hospital, Sutter Hospital in Santa Rosa was also evacuated. Much of a mobile home park behind the Kaiser facility burned, CNN affiliate KPIX said.

In Santa Rosa, the Fountain Grove Inn and Hotel was destroyed and another hotel, the Hilton, was in flames, the affiliate reported.