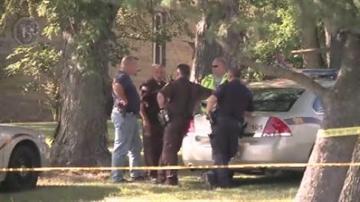 St. Joseph Metro Homicide is investigating the death of a North Liberty woman.

Police swarmed a home in the 26000 block of Madison Road in North Liberty shortly after 5 p.m. Wednesday. They found one woman dead from a gunshot wound to the head. Officers say the call came in from the woman's boyfriend who found her.

“We were dispatched to the 26000 block of Madison Road in the county for a person down. Our first arriving officers arrived on the scene, the boyfriend of the victim met them in the driveway, said that she was down on the couch and wasn’t responding. Our officer went in there and the female was in fact deceased,” St. Joseph County Sheriff Mike Grzegorek said.

Sheriff Grzegorek said any time his office deals with a case like this, he likes to call in the experts, like Metro Homicide, to make sure they get all of their questions answered for the victim's family.

“Any time we have questions that we can’t readily answer at the scene, especially when it’s an evidence processing question, we use Metro Homicide,” Sheriff Grzegorek said.

The sheriff said there is no way to determine how long this investigation will take, but he said it is well underway as of Wednesday evening.

“I really can’t speculate how long it will take them, they’re talking to her boyfriend at the present time, so it takes time to get the background and get information,” Sheriff Grzegorek said.

Sheriff Grzegorek also told ABC 57 News that detectives are not releasing any information on the victim at this time until all family members are notified.