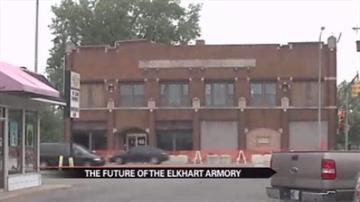 ELKHART, Ind. -- The Elkhart Redevelopment Commission is trying to decide what will become of the old Elkhart armory building on Main Street in downtown. The commission received two proposals – but didn’t care for either one.

The commission didn’t decide to tear it down – instead they’re going to let the groups behind the two proposals give it another try.

Elkhart officials bought the old Elkhart armory in hopes of saving it.

"We purchased the two parcels north of the armory, which is the parking lot, then the armory building itself was donated to the city,” said Barkley Garrett, Economic Development Director.

"In the March-April time frame unfortunately a couple of the trusses let go and a portion of the roof did collapse,” said Garrett.

Bricks began to fall off of the building and give way, so the city put up orange fencing as they accepted bids.

"We are going to get a contractor involved,” said Dan Cripe of Cripe Design of Elkhart.

Cripe Design of Elkhart is one of the two companies that have proposed bids.

But at Thursday’s Redevelopment Commission meeting, they decided to table the issue for another 30 days.

“It's not necessarily a bad thing for us. Every day is a ticking issue as far as the collapse of the building. I hate to see it open for another 30 days but will continue on and see what happens,” said Cripe.

Part of the reason the issue was tabled was money. Neither group included a financial offer with their plans.