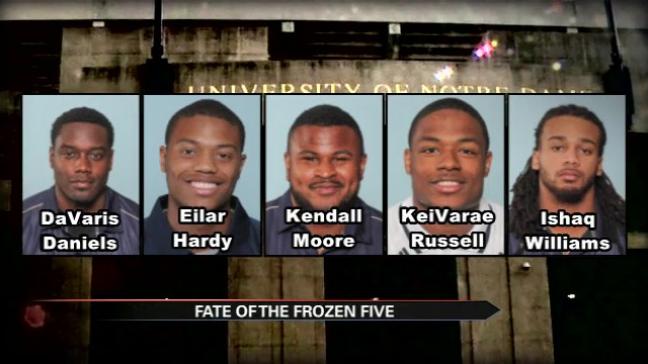 In a scheduled press conference Thursday, Notre Dame Head Football Coach Brian Kelly said he had no specific information to pass on as to the results of the academic investigation into five players.

He did say none of the five players are practicing with the team.

Ishaq Williams, DaVaris Daniels, KeiVarae Russell, Kendall Moore and Eilar Hardy have not been able to practice or play with the team since August, after it was revealed there were allegations they received "improper help" with homework assignments and papers.

Although many speculated Kelly would reveal the fate of the players on Thursday, he said he didn't have any information to share. He said much of the information he has received is second hand.

He also added that if any of the players were facing discipline, it would be up to them to share that information.

"Best way to say it to you, to be clear. I don't have any concrete finality on any of the five. Because the process for them, there is an appeals process for them and they may want to exhaust all of that  that is in front of them. So it really is up to the player, the student athlete, to really discuss it. Not me. I think it's my role to inform you as to whether they are practicing. Whether they are on the team. I don't think it's my role to come before you and tell you where they are in the process. You know, they do have  their own privacy rights and if they're going through the appeals process, they're doing that, I don't' think it's my place to get into that. I think it's up to them," said Kelly.

The five players are accused of violating the university's Honor Code.

According to the university website, once a student is accused of a violation of the honor code, each student goes before the Honesty Committee for a hearing.

According to the university's published procedures, the person making the allegation presents evidence of the alleged violation. The student can then question the person and other witnesses about the evidence. Committee members are also allowed to ask questions.

If no violation is found, the case ends.

If a violation is found, the committee decides on a penalty.

The penalty is based on whether it was a minor offense, major offense or flagrant.

The student is notified in writing of the committee's decision, then has seven days to appeal.