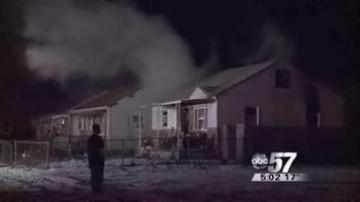 SOUTH BEND, Ind – A father and his two toddlers escaped their South bend home after one of the kids spotted the flames in a bedroom early Monday morning.

When crews got to the scene, flames were through the roof at the home on South Chicago Street, just off of Western Avenue.

The homeowner’s mother told ABC 57 one of the toddlers shouted “Fire, Fire!” and their father grabbed the two kids and rushed out of the house around 1 a.m.

The family had just invested thousands of dollars in new plumbing and electricity.

According to family members, they do not have insurance but they hope to rebuild since five generations have lived in the home.

Battalion Chief Nick Tekler said heavy flames and smoke destroyed the inside of the house, and it could be a total loss.

Family members live across the street, and the father and kids were able to stay warm while crews put out the fire.

Flames were knocked down quickly but plumes of smoke billowed out for about half an hour as crews worked on hot spots.

Investigators were still trying to figure out why the fire started as of Monday morning.