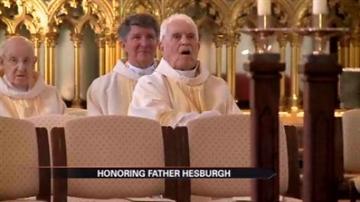 Father Hesburgh is the oldest and longest serving priest in the U.S. Province.  Friday he celebrated 70 years as priest  and Saturday he will celebrate his 96th birthday. It is two huge milestones for a man who has left his mark on the Notre Dame community.

70 years after being ordained Notre Dame's Scared Heart Basilica, Father Theodore Hesburgh returned to celebrate his many years in the priesthood.

"He was born to be a priest," said longtime friend Richard Digger Phelps. "He has always said that he had the opportunity to become a cardinal and said no."

"When I was his superior he used to always say, 'I just want to be remembered as a simple Holy Cross priest.' And I think today, celebrating with his brothers, allowed him to do just that," said Father Charles Kohlerman.

Hesburgh was one of the 21 priests and brothers celebrated at Friday's ceremony and the Notre Dame community had the honor of sharing in the special day.

"I think it's special not just for us, but for family," said Father Kohlerman. "It's special for those people we have ministered with."

Hesburgh served as Notre Dame's president for 35 years and those that know him best say the Notre Dame you see today is his vision.

"In his 35 years as president he always stepped out beyond what the university is, he was the godfather of the civil rights act," said Phelps.

Hesburgh's powerful influence both here in the U.S. and globally has made him a renowned public figure. Phelps says Father Hesburgh has a way of bringing the best out in people and has even inspired him to continue Hesburgh's work in the community.

That is why Phelps thinks Father Hesburgh deserves the highest honor the Catholic faith can give.

"I think Father Hesburgh, his whole life, as been a living saint and to me he deserves sainthood once he leaves us and goes on to another life so to speak," said Phelps.