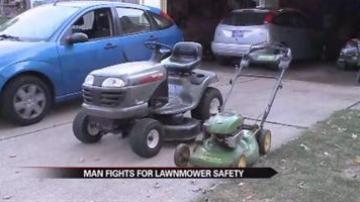 SOUTH BEND, Ind. --  A 2-year-old in St. Joseph County had to be flown to a hospital in Indianapolis after a lawn mower accident left him without toes.

Police said it happened two Saturdays ago around 12:45 p.m.

Now one dad, who had a similar accident with his son two years ago, is determined to get a piece of legislature passed that would make it illegal to ride a lawn mower with your child on your lap.

When you see 5-year-old Mason Kinzie kick a football, you would never know that two years ago he was in a horrific lawn mower accident.

“His mother was mowing the lawn with him and his brother.  His brother was on her lap.  He was playing in the yard and our younger son slipped off her lap.  She lost control of the mower and it ran over Mason,” said Justin Kinzie.

Kinzie said his son Mason, who was two at the time, almost didn’t survive.

“As the minutes keep ticking by, I was just positive I was going to be called back to identify a body sometime,” said Kinzie.

By some miracle, Mason did survive, but his injuries were severe.

“His Achilles tendon was gone, his calf muscle was ripped out, he lost something like 90 percent of his blood quantity,” said Kinzie.

Now Kinzie is trying to make people more aware of the dangers of lawn mowers; through a new bill.

“That would make riding a lawnmower with a passenger a ticketable offense, just like riding without a car seat,” said Kinzie.

Kinzie said he knows he has a long way to go before the bill is passed, but it will all be worth it if it will save one more child from going through the agony his son Mason endured two years ago.

“I need to make sure that everything that Mason suffered through won’t be in vain; that some good, some light at the end of the tunnel that comes from it,” said Kinzie.

The bill was submitted to the Indiana House of Representatives in January.  It died on the floor, but will resubmitted this upcoming session.