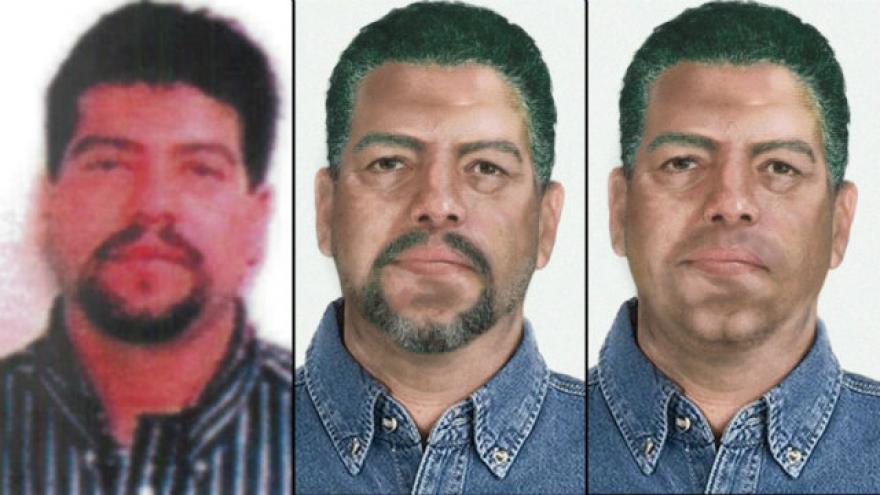 The FBI recently released age-progressed images of Mauro Ociel Valenzuela-Reyes, a fugitive in the 1996 crash of a ValuJet Flight 592 near Miami. Photo courtesy FBI

(CNN) -- The FBI is offering $10,000 for information leading to the capture of a contract airline mechanic who may have played a role in the deadly 1996 crash of a ValuJet airliner in the Florida Everglades.

The agency's Miami office also has released age-progression photos of the fugitive, Mauro Ociel Valenzuela-Reyes, who fled while facing federal criminal charges in 1999 in connection with work he conducted on the jet before its fated flight.

"We've tried over the years to find him," said FBI Miami Special Agent Jacqueline Fruge, who has led the case since it began. "It bothers me. I've lived and breathed it for many, many years."

Valenzuela-Reyes' ex-wife and children have lived in Atlanta, and he also has family in Santiago, Chile, where he may be living under a false identify and where new FBI posters are being distributed, the agency said.

Valenzuela-Reyes worked for SabreTech, the airline's maintenance contractor. Crash investigators determined he had a role in the mishandling and packaging of oxygen canisters that were placed in the DC-9's cargo hold, the FBI said.

The generators, which were missing their required safety caps, ignited in the cargo area, causing the crash that killed all 110 passengers and crew members aboard, the agency said.

Two other SabreTech employees were acquitted in the case, the FBI said. The company was found guilty on charges of failing to properly train its employees and reckless transportation of hazardous materials, though a federal court threw out the materials charges on appeal.

ValuJet flight 592 took off from Miami International Airport on May 11,1996. Ten minutes into the flight, a fire was reported in the cargo area, forcing the pilot to turn around.

But, the plane never made it back.

"It just went to pieces," Fruge said, recalling the eerie calm of the crater and shoes strewn in the surrounding sawgrass and muck.

If captured, Valenzuela-Reyes would face charges for failing to appear at trial, in addition to the initial charges, which include making false statements to the Federal Aviation Administration and the US Department of Transportation, conspiracy to make false statements and causing the transport of hazardous materials, according to the FBI.

"We want closure," she said.