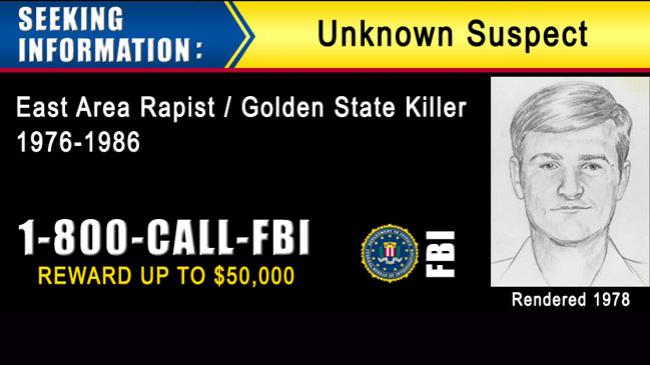 (CNN) -- Four decades ago, on June 18, a man in a ski mask broke into a suburban Sacramento-area home and raped and robbed a young woman.

She was the first of 45 people thought to have been attacked by the man, known as the East Area Rapist.

Over the next 10 years, Sacramento and Orange County, California, continued to be rattled by his presence. During that time, the FBI believes he killed 12 people and robbed more than 120 homes.

He seemed to go on hiatus in 1981 after a slaying in Irvine, California, but in 1986 he resurfaced and raped and killed a teenager. That was his last known attack.

The East Area Rapist, also known as the Original Night Stalker and the Golden State Killer, has not been caught. Forty years after his first attack, the FBI is offering a $50,000 reward for any information that could lead to his arrest and conviction.

"The sheriff's department never gave up on this investigation," said Detective Paul Belli of the Sacramento County Sheriff's Department. "This person ruined a great number of lives, and he should be held accountable."

If he is still alive, the FBI estimates the killer is between age 60 and 75.

They describe him as a white male, close to 6 feet tall, with blond or light brown hair.

Investigators have also matched his DNA, which they believe will help them link or eliminate suspects.

The renewed motivation to find the man gives his first victim some hope for retribution:

"I don't want him to be dead because I think that would be the easy way out for him," she said. "I'd rather him be tried and convicted and spend the rest of his life in prison."