Federal Reserve hikes interest rates for the first time since 2018 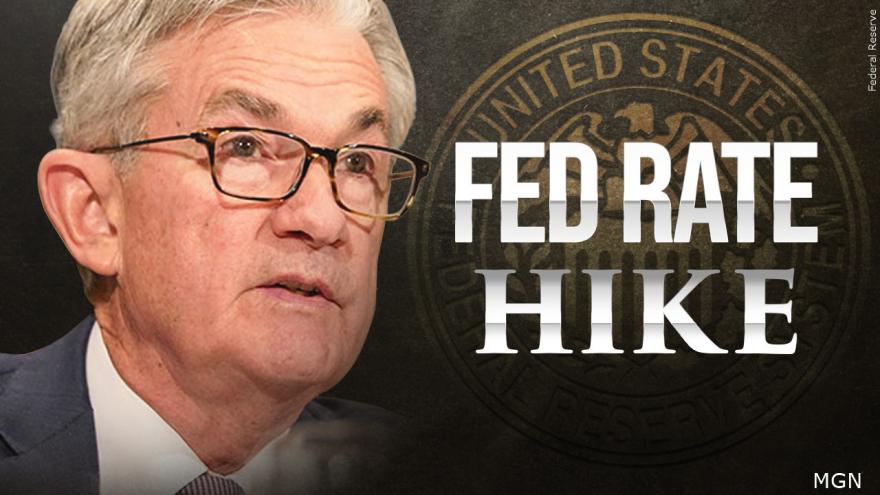 (CNN) -- The Federal Reserve is raising interest rates for the first time since 2018, the central bank announced Wednesday at the conclusion of its highly anticipated two-day monetary policy meeting.

The move marks the end of the Fed's pandemic-era easy money policy and comes amid soaring inflation across America. The federal funds rate now stands at 0.25-0.5%.

The quarter-percentage-point increase had been well telegraphed by the central bank, with Powell hinting at it repeatedly over the past few months. Earlier this month, he told lawmakers that he favored a quarter-point raise.

This is the first rate increase since December 2018 and the first time rates have moved from their level of near zero since the bank slashed them almost exactly two years ago in March 2020 in the wake of the pandemic.

Prices have soared over the past year for the majority of Americans, pushing inflation well above the Fed's long-term target of 2% and forcing its hand. The central bank has a dual mandate to keep prices stable and employment at the maximum.

But during the pandemic, prices have risen on the back of high demand, supply chain chaos and higher energy costs. Initially, Powell referred to the pandemic inflation as "transitory" before retiring the use of the term during a Congressional hearing last November.

All the expectations for factors that could bring down inflation -- such as an improvement in the supply chain gridlock and rising labor force participation -- have not materialized, Powell said. So the Fed had to act.

For the year ended in February, consumer prices rose 7.9%, while the prices US producers received for their goods soared 10% over the same period. Neither figure is adjusted for seasonal swings.

Meanwhile, the US labor market recovery has come along swiftly following the shock of the spring 2020 shutdown, which marked the largest job loss in history. As of February, the nation was still short 2.1 million jobs compared with the same month two years earlier.

Between the strong job market and high inflation only half of the Fed's mandate is fulfilled.

What will the Fed do next?

Wednesday's policy update also included a new set of projections from the central bank, showing that Fed officials expect a median federal funds rate of 1.9% by the end of this year, before raising it to 2.8% in 2023. But the Fed could also raise rates faster, if inflation does not moderate. The central bank has six meetings left this year. The next one is scheduled for May 3-4.

The central bankers also revised up their inflation predictions to a median of 4.3% by year-end, compared with 2.6% projected in December.

US economic growth was meanwhile cut to a median 2.8% this year, from the 4% expected in December.

Spillovers from the Russia-Ukraine conflict will hit the US economy and are already putting upward pressure on inflation, Powell said Wednesday.

"The implications for the US economy are highly uncertain, but in the near term the invasion and related events are likely to create additional upward pressure on inflation and weigh on economic activity," the Fed said in Wednesday's statement.

But there's no reason to worry just yet.

"We think that will hit GDP to some extent; 2.8% is still really strong growth," he said. "We feel the economy is very strong and will be able to withstand tighter monetary policy."