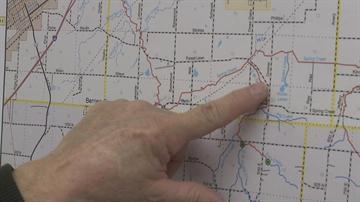 THREE OAKS, Mich. - The war against invasive species in Lake Michigan is raging on in Berrien County.

Treatment methods are underway in the Galien River for Sea Lampreys. Recent tests by the U.S. Fish and Wildlife Service show that the river and some of its streams are infested with the invasive species.

“After so many hours they will end up dying,” said Dan McGarry.  He along with 15 others from the U.S. Fish and Wildlife Service were spraying lamprecides in the Galien River Friday. Crews will be working around the clock throughout the weekend.

“It is a lot like a military operation,” said 30-year lamprey-control veteran Ellie Koon, also with the U.S. Fish and Wildlife Service. “It’s all about logistics, you need to have the right people deployed with the right equipment in the right place at the right time. The only difference is the lampreys aren’t shooting back at you, so to speak.”

Sea Lampreys were introduced to the Great Lakes in the 1920s. They’re one of the oldest and most destructive invasive species to fresh water in the Midwest. In the 1950s, Sea Lampreys eliminated the entire Lake Trout population in Lake Michigan.

“We always operate on the edge of failure, we can’t let our feet off the gas,” Koon said of testing and treating for Sea Lampreys. If untreated, lampreys would migrate into Lake Michigan. Fully grown, they can reach five pounds and destroy 40 pounds of fish each year.

“We can’t relax our effort or we’d be back to the 1950s where there were no fish in the lake,” said Koon.