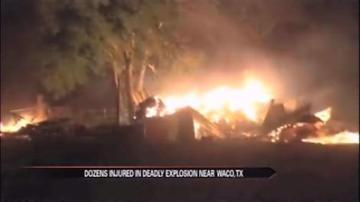 WEST, Texas -- A massive explosion at a fertilizer plant in the city of West, Texas, killed an unknown number of people and injured nearly 200 as it leveled homes and businesses nearby.

It started as a fire, then there was a loud explosion and a mushroom cloud filled the sky at 7:50 p.m. Central.

The blast could be heard and felt for miles. It was so strong it registered as an earthquake.

There are reports of numerous deaths and over 180 injured.

The explosion leveled as many as 75 to 100 homes and businesses around the plant.

Now, officials are going home to home looking for victims.

"This is probably the major most devastating thing that's happened to this community. This is just a big old cut we got across our heart,” said West Mayor Tommy Muska.

The blast also damaged a nursing home forcing the evacuation of about 130 residents.

"I don't know what their injuries are right now. But all injuries have been removed from the scene and have been taken to local hospitals in the Waco area,” said D.L.Wilson, Texas Department of Public Safety.

Authorities originally set up a triage center on the football field of a school to treat the injured.

But concerns about possible chemicals or another explosion forced officials to evacuate the area and gather at another nearby school.

The city's mayor says there is no longer concern about a possible second explosion.

At this point, no answers on what caused the explosion.

A large investigation team from the U.S. Chemical Safety Board is on the way.