Fertilizer plant railway to be closer than residents would like 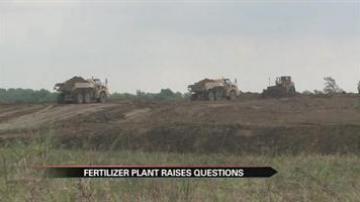 MILFORD, Ind. -- Thursday ABC57 reported that residents in Milford are unhappy with the construction of a new fertilizer plant. They claimed the work being done wasn't what was promised. We compared the blueprints submitted by Trupointe and the actual site - and there are some discrepancies.

The map shows the rail line about 100 feet from where it is now.

The facility is being built behind Dave Letherman's home.

Before work began the company told Letherman they had to add a new rail line, but it would be hundreds of feet from his house.

So we went to the Kosciusko County Planning Commission to learn more.

According to the blueprints, a sizeable portion of land behind Letherman's house is supposed to be untouched.

But a quick look around shows that's not the case.

So we wondered if the company was doing anything wrong.

County officials say they have strict limits on building size and location.

But railways is where it gets tricky.

Modifications are decided by the company.

And unless that work causes another issue like flooding, there's little they can do.

Meaning residents like Letherman could very well be out of luck.

Neighbors say flooding has been an issue here.

We reached out to Trupointe and a company spokesperson says they're still making adjustments.

The County Planning Commission says they'll do a review once the project is complete but that's still months away.

UPDATE: Trupointe issued the following release saying they have followed the site plans and everything is where it should be.